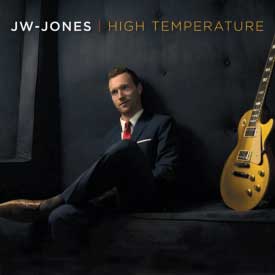 JW-Jones is on tour this April in Florida and Texas! International Blues Challenge winner (2017), JUNO Award Nominee and Billboard Top 10 Blues artist JW-Jones tours constantly, and is known for his high-energy live shows. Jones has released nine albums, and performed in twenty-three countries and four continents.

Canada’s national newspaper, the Globe and Mail, referred to this Maple Blues Award winner as “one of this country’s top blues guitar stars.”

JW’s new release, High Temperature, was named the Hot Shot Debut on the Billboard Top 10, and is the follow up to the JUNO Award nominated Belmont Boulevard. From the liner notes: “Acclaimed Nashville producer Colin Linden takes Jones into new territory with warm, analog-driven tones, and a wide-range of material. His evolution as a musician and vocalist shine through on this record like never before. Real songs, real playing by real people, and JW is the real deal.” – Chuck Leavell (The Rolling Stones)

In early 2016, Jones was requested directly from George Thorogood & The Destroyers’ management to open for several of their spring tour dates, including Massey Hall in Toronto. The band received a standing ovation at the National Arts Centre in Ottawa.

The same year, Jones toured the UK for the first time, creating a buzz that resulted in glowing endorsements from members of the band Vintage Trouble, and Joe Bonamassa’s UK publicist, Peter Noble. In 2015/2016, JW played over 100 high-energy shows per year, including being invited five times to perform alongside Buddy Guy, and twice with Woodstock legends, Canned Heat.

Belmont Boulevard hit #9 on Billboard sales charts in the United States, held the #1 position on Canadian roots radio stations for 13 weeks, and was nominated for JUNO and Maple Blues Awards in Canada.

Musicians that tour with Jones (and appear on the latest release); Mathieu Lapensée (drums) and the heavy grooves of Laura Greenberg (bass) always add a powerful energy to the stage.

The future does indeed look bright for this upcoming star. Jones has now toured in twenty-three countries and four continents, and as opening act for George Thorogood, Jimmie Vaughan, Robert Cray, and the late Johnny Winter. Now, with his latest recording, High Temperature, he’s excited about reaching an even wider audience.