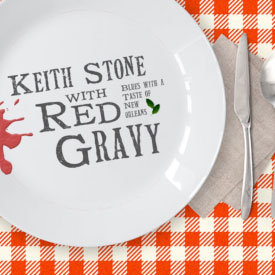 For Keith Stone’s highly anticipated second release he teamed up with Red Gravy who are made up of three of the most well-respected musicians to call New Orleans home. “It started as a frontman with a band, but now we’re a band with a frontman.”

This band delivers ten songs of original, tasteful blues, all run through the New Orleans cookbook of funk and R&B to create an exotic and spicy musical dish, but here in the Crescent City, it’s all home cookin’.

Keith Stone with Red Gravy come by the name the same way Keith’s Sicilian mama cooked up her beloved sauce: by carefully simmering New Orleans spices and spirit. The new album works the same way. Drawing from the sounds of the city that gave us Earl King, guitar Slim, Professor Longhair and Dr. John, the band pays homage to these pioneers of New Orleans Blues while carving out an identity all its own. Longtime friends Jimmy Carpenter and Brent Johnson dropped in to lend their talents and love for all things New Orleans.

There are cities, regions, and neighborhoods all over the country that can lay some claim to “the blues.” That’s all fine and good, but Keith Stone with Red Gravy is damned certain that the blues that comes out of New Orleans is the best, most unique and funkiest there’s ever been. Listen to the album and you’ll agree.