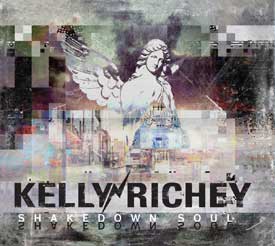 Shakedown Soul, Kelly Richey’s 16th album encompassing a 35 year career as a singer/songwriter and master guitar slinger known for her fiery chops, is a 10-track album that deftly mixes blues, funk, electronica, and gritty rock and roll. The ten tracks are woven together seamlessly with chunky guitar riffs, groove based, melodic bass lines, synthesized sounds, and in-your-face John Bonham-style drum grooves and loops. Richey augments foot-stomping rockers with blistering guitar work and husky vocals that swagger along a massive wall of sound that swirls and spins in layers with celestial glitches, DJ scratching, drum loops, horns, keys, strings, and synth sequencing into a hot mess of sonic balance that suits her raw, ultra-personal all-original song lyrics. Shakedown Soul features melodic, well-arranged songs that feel both ethereal and hard as concrete. Richey’s riff-heavy guitar is gritty and dirty, and she steps out of the box on this album to incorporate synthesized sounds with her signature Strat that perfectly and masterfully complete each other.

Richey’s road-worn vocals indicate a competent authority, singing about survival, unanswered questions of life, betrayal, and failed relationships. In the vein of Richey’s last studio release “Sweet Spirit,” her powerful lyrics don’t sugarcoat. Her husky alto voice has matured into a beautiful timbre that is extraordinarily powerful and controlled— and just gets better with time.

In “You Wanna Rock” and “Love” you can hear some of Richey’s early influences from bands like Led Zeppelin, Free, and Bad Company. The song “Lies” is influenced by Sheryl Crow’s self-titled album, and the tracks “Afraid To Die” and “The Artist In Me” are haunting tunes that reflect the influence producer Daniel Lanois and artist Emmy Lou Harris’ Wrecking Ball album had on Richey. Add to that list “Just like A River,” and you have three songs taken from Richey’s poetry and reflect her influence of artist Patti Smith— while musically being influenced from bands like the Smithereens and early Chrissy Hinds of the Pretenders. “I Want To Run” draws on straight-forward power chords and powerful riffs that pull from influences like Lenny Kravitz. “Only Going Up” and “I Want To Run” is where you’ll find a classic example of where rock and roll and electronica meet face to face! Richey approached the writing and recording from a strip-downed perspective, writing the majority of this material to both rock and hip-hop drum loops.

Heavily influenced by the work of early Black Keys, Jack White and Led Zeppelin, Richey handed her songs to Tobe to “do his thing.” Richey said to Tobe and Rikk, “You make me cool and you make me relevant and I’ll make you rock!” Indeed she did! Tobe brings his unique bend of heavy funk, electronica, D.J. production to each song, and Rikk Manning completes the groove with his spectacular bass playing.

Richey sings bittersweet words inferring an inner questioning and internal pain that reveal as a hard-won resoluteness. Insipid, she is not; instinctively peeling back the layers, Richey’s Shakedown Soul is an undeceptive sojourn that never makes excuses. Sonically lush, emotively raw and exceedingly honest, Shakedown Soul is Richey’s finest work to date.

Kelly Richey is a master blues guitarist, who has been touring as a pro nationally and internationally since her teens. Richey is one of the hardest working musicians out there logging an astounding 800,000 miles and 3,700 shows in her career, to date. She fronts her blistering power trio, The Kelly Richey Band, featuring Tobe “Tobotios” Donohoe and Rikk Manning, with a rock-solid poise and assurance that is unmistakable. Her fret board prowess and muscular guitar chops showcase the blood, sweat, and tears of Richey’s unflagging 35-year career. The Kelly Richey band is currently on tour nationally, in support of the new album.