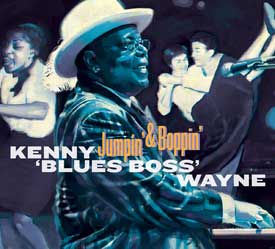 Jumpin’ & Boppin’, is the latest CD from Kenny “Blues Boss” Wayne. Wayne was named “Most Outstanding Musician (Keyboards)” for 2015 by Living Blues magazine. Produced by the “Blues Boss,” himself, Wayne’s third CD for Stony Plain is firmly rooted in the joyful jump blues style of Louis Jordan and Amos Milburn. Special guests on Jumpin’ & Boppin’ include award-winning guitarist and labelmate Duke Robillard, as well as Russell Jackson, B.B. King’s long-time bassist, who locks-in the rhythm section. The new disc showcases 12 original songs and one cover (“You Don’t Know Me”) that clearly illustrate Wayne’s way with a keyboard, as well as his soulful vocals.

“I’ve really been looking forward to this record and I’m very excited to share it with you,” exclaims Kenny in the album’s liner notes. “This recording has elements of the great jump blues and boogie-woogie era. You might hear some influences from the era of Louis Jordan, Amos Milburn, Ray Charles, Johnnie Johnson and Fats Domino, just to name a few that are all mixed in like a blues stew.

“This is my second shot at producing my own recording and since then I’ve learned a lot by sitting back, watching and listening to experienced producers on how to produce a record. On this session, I’m glad to have young Charlie Jacobson laying down the basic guitar on the tracks and to have world renowned players like Duke Robillard, Russell Jackson, Joey DiMarco (drums and percussion), Sherman Doucette (harmonica) and Dave Babcock (sax) contributing their talents to this recording as well. This is my tenth blues album and my third recording on Stony Plain Records. I am looking forward to many more recordings on this enduring Canadian label, which celebrates 40 years of music in 2016.”