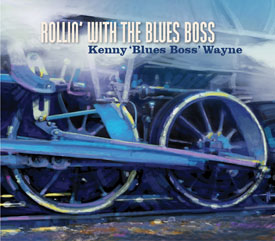 Monster keyboardist and soulful singer Kenny Wayne’s latest album, Rollin’ With the Blues Boss, his second album for Stony Plain Records, was produced and recorded in Vancouver by Tom Lavin, leader of Canada’s legendary Powder Blues Band, and it features some of the city’s most creative backup players. It also features guest appearances on one track each from Stony Plain artist Eric Bibb and singer Diunna Greenleaf. Resplendent in one of his many multi-hued French custom-tailored stage suits, Kenny Wayne is a throwback to the golden age of classic rhythm and blues.

On Rollin’ With the Blues Boss, he flashes all of that and more on the album’s 11 all-original tracks, loaded with excursions into boogie-woogie, New Orleans-fueled R&B, blues, jazz and good-time rock ‘n roll. With Kenny Wayne, it’s all rolled up into one sartorially resplendent gem of-a-complete entertainer.

Of the new album’s many highlights, “Leavin’ In the Morning” kicks things off in fine style with a bouncy, bluesy riff that recalls B. B. King’s “Never Make Your Move Too Soon;” and “You Bring Out the Jungle In Me,” is aided by a punchy horn section that provides the same kick on several other songs. Blues Music Award-winner Diunna Greenleaf trades lead vocals with Wayne on the soul-blues ballad, “Baby, It Ain’t You;” and another BMA winner, Eric Bibb, supplies lead vocals and an acoustic guitar solo on the rollicking “Two Sides.” The jazzy-flavored “I Can’t Believe It” sounds like a song outtake from an old Bill Withers session; and “Ogopogo Boogie” is straight Crescent City N’awlins classic grooves from start to finish. The “Blues Boss” closes out the set in fine style as only he can, accompanied by just a drummer and pounding the 88s into submission on the instrumental, “Out Like a Bullet.”

Wayne is a veteran blues and boogie piano player and also a three-time Juno Award nominee (Canada’s Grammy), including a win for his Let It Loose CD. His first album for Stony Plain, An Old Rock On a Roll (2011), garnered him a nomination for the Pinetop Perkins Piano Award from the Blues Foundation, as well as being awarded two 2012 Living Blues Awards, one for “Best New Contemporary Blues Recording of 2011” and one for Wayne as “Most Outstanding Musician (Keyboard).”

He was raised in Los Angeles, San Francisco and New Orleans, but has been a long-time resident of Vancouver, British Columbia, where his new album was recorded. He is now living in beautiful Kelowna, British Columbia. A touring musician from his teens onward, Wayne settled in Vancouver some 30 years ago, but is rarely home — thanks to extended tours in Canada, the U.S. and Europe. His bass-heavy boogie piano work, as well as his original songs, makes for powerful live performances.