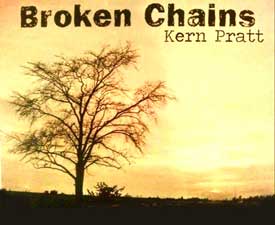 “Music courses through Kern Pratt’s veins as sure as the Mississippi River flows through the Delta. And just like the Mighty River has affected lives up and down its banks, Kern touches the souls of those who hear his music. After all, music is the voice of the soul and Kern helps us hear it loud and clear. Kern’s music blends all that is good about Delta music and takes it out into the world. His rock influenced blues produces funky, bluesy, jazzy, toe tapping tunes that are a blend of the musicians who influenced him along with life experiences that have left a mark on him personally and his music. Broken Chains is about life, loss, moving on, getting on, dealing with everyday life, all peppered with the musical talents of a host of guest artists led by Kern,” (Anne Martin, journalist and contributing writer for several local and regional magazines and author of Music of the Mississippi River)

Kern Pratt, a Mississippi Delta native, brings the blues alive every time he starts to play. He has played all over the United States, including The Mississippi Picnic which takes place in Central Park in New York City, the Mississippi Delta Blues Festival, the Annual Juke Joint Festival in Clarksdale, MS, and the Annual B.B. King Homecoming. He has also performed in The International Blues Competition in Indianola where he placed second in 2013. Pratt surrounds himself with some of the most talented musicians that Mississippi has to offer and provides you with a performance like no other!

Pratt, while never overlooking the cultural legacy passed on by his blues hero’s, has developed a unique style of his own. Because of his high level of music integrity he has gained a reputation as one of the most authentic and hardworking musicians in the south.