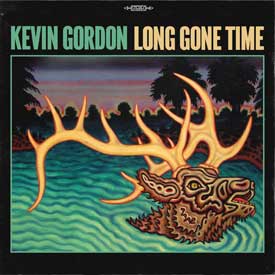 The album opens with “All In The Mystery,” a loping come-on loaded with sexual innuendo like Elvis Costello on a road trip south of the Mason-Dixon. Rich with visual detail, “GTO” tells the story of his father’s stolen car, while “Letter to Shreveport” is a haunting stream of consciousness punctuated with ominous slide guitar, and “Walking on the Levee” evokes the magic and the loneliness of an early-morning trek along the edge of a memory-filled town still “sleeping off what they drank at the bar.” On “Goodnight Brownie Ford,” Gordon poignantly pays tribute to the rodeo-riding country singer, and the bittersweet “Shotgun by the Door” paints vivid portrait of lingering racial tension. Later in the album, Gordon and his crack band morph into rollicking roadhouse rockers with “Church on Time” before closing out the record with the subdued, vivid character studies of “Cajun with a K.”

Praised by NPR, The NY Times, USA Today, and more, Gloryland, marked the end of a six-year hiatus for Gordon, whose work has been covered by everyone from Keith Richards and Levon Helm to Ronnie Hawkins and Todd Snider. In his illustrious two-and-a-half decade career, Gordon has shared stages with Snider, John Prine, Leon Russell, Clarence “Gatemouth” Brown, and the Blind Boys of Alabama among others, played the storied New Orleans Jazz & Heritage Festival, and earned the respect and admiration of his peers and a slew of musical icons. Lucinda Williams raved that “he’s writing songs that are like short stories,” while Buddy Miller said “it reminds me why I love music,” and renowned author and biographer Peter Guralnick described the music as, “John Lee Hooker tied to the hard, imagistic poetry of William Carlos Williams.”