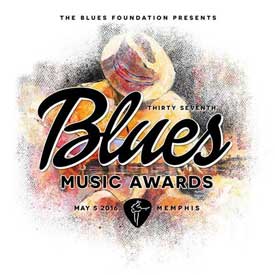 MEMPHIS, TN – The Blues Foundation annual Blues Music Awards will be presented at the Cook Convention Center in downtown Memphis, Tennessee, on Thursday, May 5, 2016. The list of nominees is below and you must be a member to vote.

The Blues Music Awards are universally recognized as the highest accolade afforded blues music performers. The annual Blues Music Awards ceremony is the premier event for blues professionals, musicians, and fans from all over the world. The focus of this celebration is to honor this rich cultural tradition by recognizing the past year’s superior achievements in blues performance, songwriting, and recording.

James Harman leads the list with five nominations, with Anthony Geraci and Sugaray Rayford close behind with four nominations each. Harman and Geraci will go head to head in three categories: Best Song, Best Album, and Best Traditional Blues Album. Harman’s special gift at musical storytelling combined with the soulful sound on his newest release Bonetime propelled him to a nomination as Best Traditional Male Blues Artist, and his strong musicianship opened the door for a nomination as Best Instrumentalist-Harmonica, while Geraci’s piano finesse led to a nomination for the Pinetop Perkins Piano Player. Rayford, with a more modern sound, received nods for Contemporary Blues Album and Contemporary Blues Male Artist as well as Best Song and B.B. King Entertainer. 2016 Grammy nominated Cedric Burnside and Shemekia Copeland along with Doug MacLeod, The Cash Box Kings, Victor Wainwright and Wee Willie Walker each received three nominations.

Every year, the Blues Music Awards ceremony proves to be one of the best shows of the year as almost every nominee not only attends, but also performs – creating a lineup comprised of the best of the best in blues all in one evening. A ballot is sent to all Blues Foundation members as they have the privilege of deciding which nominees will actually take home a Blues Music Award in May. In addition to the complete nominee list, membership, voting, ticket, and host hotel information can be found at The Blues Foundation’s website—www.blues.org. For more information, call 901.527.2583.

The Blues Foundation is Memphis-based, but world-renown as THE organization whose mission is to preserve blues heritage, celebrate blues recording and performance, expand worldwide awareness of the blues, and ensure the future of this uniquely American art form. Founded in 1980, The Blues Foundation has approximately 4000 individual members and 200 affiliated local blues societies representing another 50,000 fans and professionals around the world. Its signature honors and events–the Blues Music Awards, Blues Hall of Fame, International Blues Challenge and Keeping the Blues Alive Awards–make it the international center of blues music. The recent opening of the Blues Hall of Fame Museum, in Memphis, TN, now adds the opportunity for music lovers of all ages to interact with the music and the history. For more information, log onto www.blues.org.