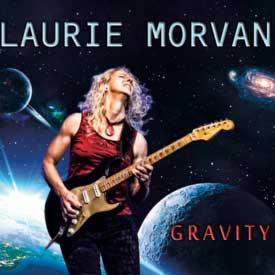 Laurie Morvan (More-Van) delivers a double dose of fun on her new album, Gravity, as she shines on stellar guitar work and soaring vocals. For her sixth full-length album, Morvan partners with acclaimed drummer/producer Tony Braunagel and his team of A-list players at Ultratone Studios to record 12 fresh tracks of commercial blues rock and soul. Originally scheduled to be recorded back in 2014, the project was delayed when Laurie suffered a wrist fracture that required two surgeries over the next couple of years. Releasing this album is especially meaningful for Laurie, and the whole band is energized to be sharing this exciting new music with fans.

The album opens appropriately with bass drum thump and Stratocaster boogie, on the hard driving “My Moderation,” demonstrating the alliance between the drummer and the lead vocalist/guitarist, which sets the tone for all to come. Morvan’s voice draws comparisons to Christine McVie as her throaty alto leads the charge on the edgy “Twice The Trouble,” and the persuasive blues “Stay With Me,” while her stinging guitar leads are braced by hot Hammond B3 from ace Mike Finnigan. The Texas shuffle “Money Talks,” and the southern funk of “The Extra Mile,” shows her paying tribute to both sides of Freddie King. Morvan then testifies to the power of love with complex fret and lyrical work on the expansive title track “Gravity,” pushing the boundaries of jazz, pop and rock. A touch of SRV sneaks into the uplifting groove of “Dance In The Rain,” and she gets greasy on the swamp rocker “Gotta Dig Deep.” Morvan plays the role of a blues diva on the Bessie Smith styled southern gothic “The Man Who Left Me,” and then lays down some straight-ahead R&B under a lesson on how to brush off your troubles for “Shake Your Tailfeathers.” Some more gritty guitar work highlights the evocative “I Want Answers,” and album closer “Too Dumb To Quit,” features slick slide guitar, witty lyrics and a sweet New Orleans street beat.

The Laurie Morvan Band is a 5-piece high energy, rockin’ blues band lead by a fiery female lead guitarist vocalist. A pumpin’, thumpin’, tight-as-nails machine from Long Beach, CA, the LMB has fired up over 700 festivals and club dates throughout the USA, Canada and Europe. So much more than just a wailin’ guitar slinger, Laurie is a charismatic performer whose stage presence is both powerful and inviting. Her songwriting has a fresh perspective, and her in-between-song banter alternates between inspirational and flat-out hilarious. Laurie Morvan Band concerts feature the beautiful harmonies of Laurie and backup singer Lisa Morvan, as well as dueling solos between Laurie, keyboardist Tom Salyers and bassist Pat Morvan. Drummer Lonnie Jones drives this high-octane train.