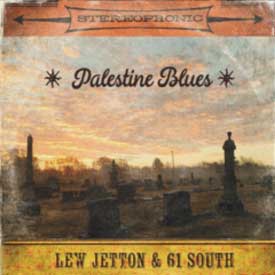 Palestine Blues, the latest, all original album from Lew Jetton & 61 South is a personally poignant and sometimes brutal memoir of a 10-year period in Jetton’s life which included struggles with alcohol, drugs, depression, joblessness, frustration and a spiritual tug of war.

Lew Jetton says, “Palestine is the community in which I live but it’s also a place of historic significance for being sacred, while at the same time, a place of conflict. That’s kind of where I have been for years. I know a lot of blues is happy and uplifting. This is not. I’m OK with that. I wanted it to be real blues, in the emotional sense, and that’s what Palestine Blues is.”

Palestine Blues is pure emotion. Recorded 3 piece, for the most part, with just Lew on guitar, with bass and drums, so the essence of the songs could show through. No posing. Just the raw feeling, so you really can feel the frustration, the helplessness, the anger, the sadness, that are a way of life for so many today.

Palestine Blues follows on the heels of Lew Jetton & 61 South’s 2016 release Rain, which spent more than 6 months of the Roots Music Report’s Contemporary Blues Chart, receiving extensive airplay worldwide and finishing #36 in their year-end list of all the Top 200 releases.

“Very original. Very dark. Think Gary Clark Jr meets Townes Van Zandt. Maybe the most REAL blues I’ve heard in a long time, because it deals with real life and real problems so many of us are facing today. Not a bunch of superficial BS. It’s about real pain. The problems the working families and working poor are dealing with. This one tells it straight “in your face.” Luke Williams, WKYQ

“I’ve played him on my shows in the past, but this CD takes it up another explosive notch!!“ Cap’n Barney, Mayflower Hill Blues

“A powerful collection combining creative original lyrics and instrumentation with traditional and contemporary blues themes… gets better every time I play it!” Brion Foster KYRS