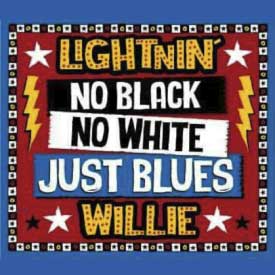 Bluesman Lightnin’ Willie has a distinctive approach to his music. The sound is an irresistible blend of tradition and spontaneous creativity, with a deliciously insidious emphasis on the groove. It is a compelling, hard swinging brand of blues that, whenever he performs, packs the floor—his audience can’t not dance. A guitarist of impressive facility, a vocalist of coolly stylish authority and a composer of persuasive original blues that both extend and enhance the idiom, Willie’s music has a rare individualistic quality. It is at once airy and full of open space yet also loaded with earthy, intense emotion, and as featured on his new Pete Anderson produced album, No Black No White Just Blues, it showcases a master at the top of his game.

Lightnin’ Willie has gone from low down beer joints to become staple on the international festival circuit, with plenty of wild stops along the way, from London’s Royal Albert Hall Ignite Series to Willie Nelson’s infamous 4th of July Picnic, where he appeared alongside Paula Nelson, Willie, Bob Dylan and Leon Russell. The always dapper Lightnin’ Willie, consistently genuine, never flashy, boundlessly entertaining, is reliably a high-quality blues powerhouse who makes new fans with every performance. These attributes have won him stacks of enthusiastic praise from the international press and landed his original tunes on numerous film and television soundtracks.