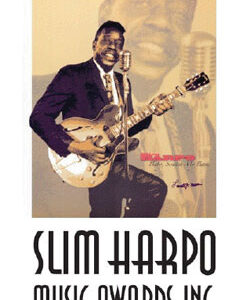 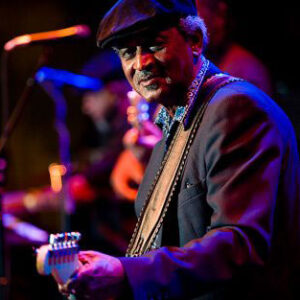 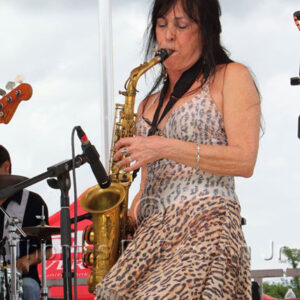 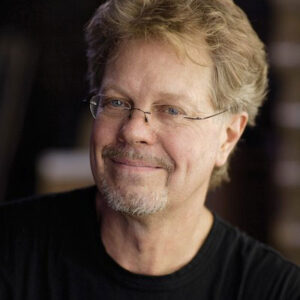 Nicknamed “The Master of the Stratocaster,” Sinegal added guitar to zydeco king Clifton Chenier’s Bogalusa Boogie, a 1976 album that now sits in the Grammy Hall of Fame and Library of Congress National Recording Registry.

Sinegal is proud of those accomplishments, but there’s a special ring in his voice when he talks about his own band, Lil Buck and the Top Cats. The 17-piece soul and funk outfit could have given James Brown a run for his money.

“When I had my band in the ‘60s, we played almost every prom in Louisiana,” said Sinegal. “We could play some music.

“We wore different color tuxedos every night we played. The band was so lively. The horn players would dance with their horns, bouncing up and down. It was a show.

“It was an out of sight group. All the Mardi Gras balls they had in the ‘60s, we were playing them.”

Sinegal will be recognized for his Top Cat days and more at the Slim Harpo Music Awards Thursday [June 23, 2016, 7;30pm] at the Varsity Theatre in Baton Rouge (3353 Highland Rd.). An annual presentation of Pal Productions, the awards honor the states veteran musicians and promoters.

Sinegal will receive the Legends honor, given to musicians with, according to web site, “credits of historical blues music status.” Paula Rangell (Paula & The Pontiacs) will get the Pioneer honor. Scott Billington will be named Ambassador.

Louisiana music fans may not instantly recognize Billington’s name, but they know his work.

With 40 years at Rounder Records, he helped Solomon Burke, Gatemouth Brown, Charlie Rich and Ruth Brown achieve legendary status. Steve Riley, Nathan Williams and Chris Ardoin are among the Lafayette-area artists who worked with him.

Billington molded the iconic sounds behind Buckwheat Zydeco, Beau Jocque and Irma Thomas first Grammy winner of her 50-year career, “After the Rain.” But he’s most proud of the nine albums he produced for New Orleans singing legend Johnny Adams.

“He was one of the greatest singers of the last century — in any style of music,” said Billington. “His phrasing, his pitch, his diction, his musicality. He was a gospel singer, a jazz singer and a blues singer.

“He just had that beautiful, beautiful voice. One in a million people don’t get a voice like that. We were able to explore many different directions together, including some where he hadn’t gone before.

“Through the course of our work together, people got to appreciate that this wasn’t just an oldies act or just a singer from the ‘60s. You got to hear the breadth of the talent of one of the great vocalists of the 20th century. I wish we could have done more because there was so much more there.”