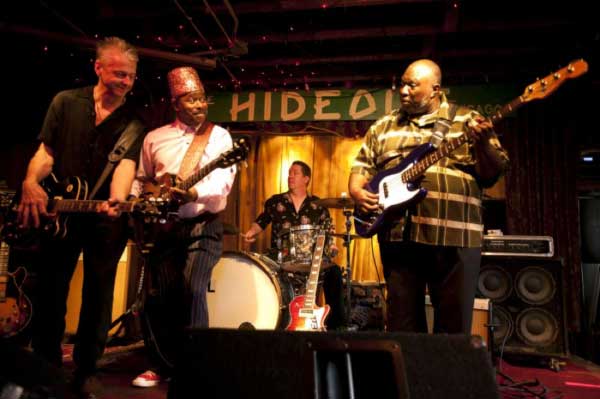 Williams said he learned this houserockin’ style of slide guitar from Hutto. It’s a style that fascinated him from a young age when Hutto and other relatives would play at family gatherings.

He also learned the ins and outs of the music business from his uncle. And that distinctive fez he wears onstage? That too is an homage to Hutto, who sported the headwear during his live shows before he passed away in the early 1980s.

“I was always trying to make them myself, but I couldn’t quite get them right,” said Williams by phone from his home in Chicago.

“Usually they were too heavy or too tall. One was so heavy I could barely hold my head up,” he chuckled. “And so, when I got married, my wife started making them. She made them right.”

He can’t find the fez he likes to wear in stores.

“Because they all have tassels and pointy tops. My fez has a straight round top,” said Williams, who signed with Alligator Records in the middle 1980s, a few years after Hutto died. But before he signed the record deal, Hutto would often take him to clubs where he performed and did see his nephew perform before he passed away.

“He’d come to a couple clubs on the west side… I was doing this little bitty clubs on the west side then. I’d be in there playing and people would just be sitting around and talking not paying much attention to me. What was fascinating is that Uncle J.B. would come in there and literally cuss the people out,” he laughed at the memory.

“These boys are just trying to make you guys have a good time and you all ignore him. What is your problem?” said Williams mimicking his uncle, who would then tell Ed to fetch his guitar in his car and then Williams would end up playing rhythm guitar as a sideman for Hutto at the venue.

“And we’d light the place up,” howled Williams. “It was amazing.”

Great impromptu tutoring for the kid whose father left home when Ed was 6 years old. His aunt and grandmother stepped into the void and raised Williams for several years. Details from that time are sketchy, but he recalls his mother and father arguing about something that is lost in the ether.

“I remember him saying, ‘I’ll see you in a couple weeks,'” said Williams. “And I didn’t see him anymore. So, after my grandmother had passed around age 12, my auntie had me for a while. My brother Pookie (also a Blues Imperial) was with my mom. So, one day my auntie asked me if I wanted to stay with my mom, and I said ‘yes’ and went to stay with her.”

Moving in with mom meant also moving in with a stepfather, a prospect Williams was leery of, anticipating hostility from a man not his father. Turned out to be a blessing, as Williams characterized his stepfather as “a really good dad to me.”

With the passing of so many blues legends in the last decade, Williams is becoming one of the elder statesmen in traditional blues music, certainly in Chicago if not nationally. He has nine records to his credit with Alligator since 1986 and a couple solo records on Earwig Records. He said he feels a responsibility to keep traditional blues music alive and relevant.

“You know there are youngsters out there that still love the blues and traditional blues, they just have to be around people that do it. I’m running into a lot of youngsters really excited about what I do and really want to learn that. But they have to learn to pay their dues.”

That’s something he said not all younger players he runs into are willing to sacrifice to learn how to really play the music.

“You know, that’s what Uncle J.B. taught me. He said, ‘You’ll never get rich, but you’ll always have fans within a family,’” said Williams.