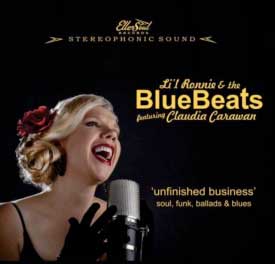 This aptly titled CD, unfinished business, has been a long time in the making. The BlueBeats were a very popular regional band in the 80’s and early 90’s. They just recently finished their 2nd CD that they started recording way back in 91′. The record features the incredible gospel tinged vocals of Claudia Carawan. The rest of the band is Jim Wark- guitar, Stu Grimes – drums, Mike Moore – bass, Eric Holt – keyboards and vocals and Ronnie Owens on harmonica and vocals. They had written all the songs and had recorded 8 tunes in 91′ but sometimes things don’t turnout as planned and life just gets in way. Well here it is 23 years later and they’re finally got unfinished business finished. The CD is a real mix of styles with 12 impressive originals and 2 choice covers by Ray Charles and Louie Prima. This is Ronnie’s band before the Grand Dukes. Sounds like he’ll be a busy man fronting both bands.

“mercy, mercy, mercy me, we got us some swingin’, jumpin’, funky goodness”