Lisa Biales :: BELLE OF THE BLUES 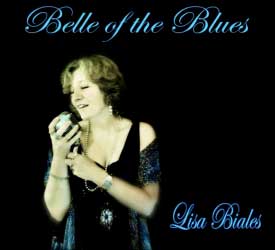 EG Kight also produced Lisa’s acclaimed Just Like Honey album in 2012 and duets with Biales on one of the many musical highlights of the new disc, like the cookin’ take on Memphis Minnie’s “In My Girlish Days.” EG also adds acoustic guitar and harmony vocals on a few other tracks and co-wrote several songs on Belle of the Blues. Co-producer Paul Hornsby provides his signature piano work throughout the new album.

“Recording with EG Kight and Paul Hornsby was more enjoyable the second time around,” recalls Biales about the sessions. “We’d been through the arduous task once before and became friends.  However, recording is not all gravy. I got anxious about one song and struggled with it for a while in the studio. Paul and EG suggested a break. When I returned, the lights were turned down, a single candle was lit, and a glass of wine was filled.  No longer feeling apprehensive, I sang ‘…and I wonder if I’m under some spell that you bring, when you make me, when you make me do… ‘Bad Things.’”

Biales, who is known for her clear-as-a-bell singing voice, has been dubbed, fittingly, “Belle of the Blues.” The 11 songs on Belle of the Blues showcase a diverse set of material that feels right at home with Lisa’s passionate in-the-pocket vocals, which have a slant of southern sass to them.

“I have a secret wish to be the most desired back-up singer on the planet,” Biales admits. “Even though I know there are a few who already hold that title: Darlene Love, Merry Clayton, Judith Hill and Lisa Fisher to name a few.  I loved singing back-up with EG on her songs, ‘Bad Girl,’ ‘Trouble with a Capital T’ and ‘Belle of the Blues.’ Working out the parts and hearing our voices resonate together was thrilling. So, it was an extra treat to have EG Kight join me on the Memphis Minnie duet, ‘In My Girlish Days’ where we trade verses and sing in harmony.”

Lisa has a special recollection about the recording of “Peach Pickin’ Mama,” too. “EG wanted me to play it for the band so they could get a feeling for the song,” she remembers. “We all sat around with guitars, and the jam that happened in the office with Tommy Talton, EG Kight, Tommy Vickery (bass), and Paul Hornsby playing his childhood guitar was priceless and is forever engrained in my memory as a precious moment in time.”

While Belle of the Blues has many kickin’, up-tempo songs, it has its share of ballads, as well. “I love singing sad songs,” Biales confesses. “The strong array of emotions that bubble up, and the connections I feel to people while singing them makes me realize my worth. I looked into the EG Kight songbook and found two songs that wrap around my soul like a big warm blanket, ‘Mask’ and ‘Sad Sad Sunday.’”

Another influence on Lisa Biales is Bessie Smith, who she calls “one of the greatest classic blues singers of the 1920s and someone I have grown to admire. It’s only fitting to have her presence on this recording with two songs: ‘Black and White Blues’ (a song written by blues historian Dalton Roberts as a tribute to Smith) and ‘Baby Won’t You Please Come Home.”  ‘The Empress of the Blues’ meets ‘The Belle of the Blues.’’’

Over the past several years, Lisa Biales has been busy recording and singing the blues. Iconic movie director Francis Ford Coppola enjoyed one of her performances so much that he cast her in his film, “Twixt,” where Biales portrays a waitress named Ruth (and as a bonus, picks up a guitar and sings, too).

In 2013, Biales backed by Ricky Nye and The Paris Blues Band recorded Singing in My Soul, an up-beat early jazz and blues album. Radio and critics loved Lisa’s music and the album won the Cincinnati Blues Society’s Best Self-Produced CD, also garnering her a spot at the upcoming August 2014 Cincinnati Blues Fest.