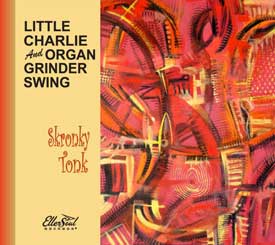 Skronky Tonk has been a dream of Charlie Baty for quite a while now and showcases swing, blues, jazz standards and even some Gypsy Jazz, all done with Charlie’s unique guitar stylings. Most of you know Charlie Baty as leader of Little Charlie & the Nightcats. Former Nightcat band mates, Lorenzo Farrell on Hammond organ and J. Hansen on drums join him on this swinging CD that was recorded and engineered at Greaseland Studios by Chris “Kid” Andersen. There is no mistaking Charlie’s creative blues guitar playing, as he’s a true legend in this field. Skronky Tonk finds him in one of his favorite settings, an organ jazz trio. Charlie always played some swing jazz tunes with the Nightcats, which has led him where he is today. If you’re a Charlie Baty fan you could really dig this record.