Little Mike & The Tornadoes :: ALL THE RIGHT MOVES 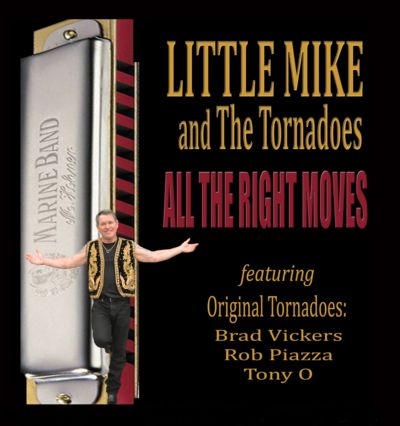 All The Right Moves, released on Elrob Records in May, reunites Little Mike Markowitz, guitarist Tony O. Melio, bassist Brad Vickers and drummer Rob Piazza after a brief musical hiatus. The band has been playing together since forming in the late seventies. When you hear this recording your understand why they were band of choice when visiting blues luminaries came to New York City to perform. They honed their craft while touring with blues legends Hubert Sumlin, James Cotton, Pinetop Perkins, and Jimmy Rogers. The also recorded on several records for the Blind Pig label between 1984 and 1990.

“All The Right Moves is a highly enjoyable blues album with a classic feel that recalls the Chicago blues of the 1950s. Mike Markowitz sings throughout, with deft phrasing, and plays the harmonica masterfully, always tastefully and never becoming overbearing. The title track showcases his harmonica chops admirably, without ever overshadowing the other instrumentals. The guitar work throughout is very cool, very retro, never boring. The songs, all original, are a fine collection of blues songs that you feel you already know, but look forward to hearing again. There is some fine blues piano from Jim McKaba as well, with interesting interplays between guitar and piano on a number of tracks, including “Since My Mother’s Been Gone.” The latter has a lovely 1960s feel to it, best heard in a dark room, late at night.

From the opening “Hard Hard Way” – immediately appealing with its hoochie coochie-man feel – through the 13 songs to the final, “Close to My Baby,” a throbbing, vintage 12-bar number, Little Mike and the Tornadoes have given us a terrific, stripped down, classic Chicago blues album that should be on every blues fans wanted list this year.”