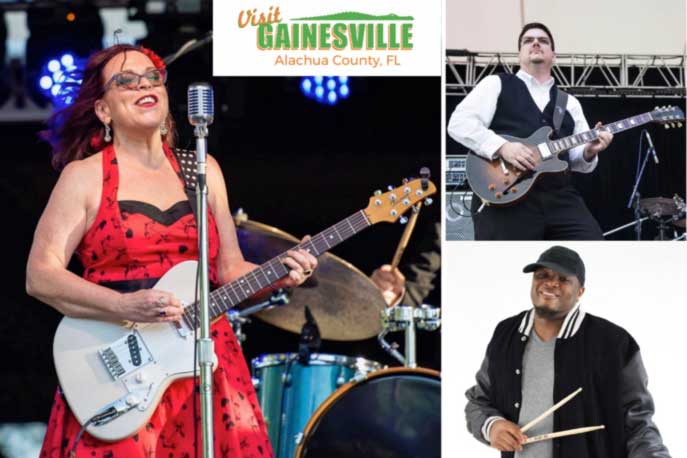 (GAINESVILLE, FL) – Blues singer/songwriter and Chicago Blues Hall of Fame Inductee Liz Mandeville will play Gainesville for the first time with her band The Blue Points on Friday, November 15 at the Gainesville Downtown Blues Concert, a free show sponsored by the North Central Florida Blues Society at the Bo Diddley Plaza.

Voted as the best blues singer in Chicago, Liz has honed her craft in the Blues bars of Chicago over the last 3 decades, with house residencies at prestigious clubs such as the Kingston Mines, Blue Chicago, Bill’s Blues, BLUES on Halsted, and Rosa’s Lounge. She’s played every major venue and festival in the Midwest and toured extensively in the U.S. and Canada.

She was heavily influenced by the witty swinging songs of Louis Jordan, Big Maybelle, T-Bone Walker and the soulful voices of Etta James, Tina Turner, Otis Redding, Tyrone Davis and Bobby Bland. With a sense of humor that shines through her impassioned performance, Liz is a polished, consummate entertainer, not to be missed.

“We’re excited about having Liz Mandeville play Gainesville,” North Central Florida Blues Society president Rob Richardson said. “She’s a fantastic talent that Florida audiences don’t often get an opportunity to see as she’s often playing in Chicago or touring Europe. Anytime you can see someone talented enough to play the Chicago Blues Festival, you really shouldn’t miss it. She’s a fantastic artist that writes some top-shelf songs. She has a great voice and her music will get you dancing! When we talk about how the North Central Florida Blues Society works to bring the very best to Gainesville, Liz Mandeville is a perfect example of what we are striving for.”

441 South is a Blues Band with significant gospel, soul, and rock influences. Formed in 2019, it is fronted by Shae Mullberry on vocals. Shae’s husband Tim Mulberry mans the drums, and boasts an impressive resume that includes two years with the Bridget Kelly Band and a six- month world tour with The Black Eyed Peas. Electrifying guitarist Frank Bougher and bassist Greg Mullins are also noteworthy band members.

Brett Wellman & Stone Cold Blues is a Chicago-style electric blues band featuring Brett Wellman on lead vocals and guitar and Chris Balding on harmonica and vocals. The band’s performances have been called “engaging” and “high-energy” and its main fluences include Howlin’ Wolf, Muddy Waters, and Little Milton.

The North Central Florida Blues Society is a non-profit organization dedicated to the preservation, cultivation, nurturing and promotion of Blues Music. See more at the website.