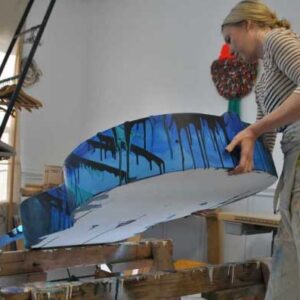 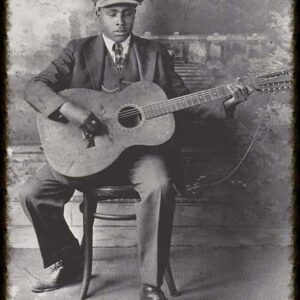 THOMSON, GA – A new public art project is in the works to honor McDuffie County blues legend Willie McTell. The Thomson-McDuffie County Convention and Visitors Bureau has charged 12 local artists with creating and designing 7-foot-tall polyurethane replicas of the blind musician’s instrument of choice, a 12-string Stella guitar, to be included in the art project dubbed McTell’s 12-String Strut.

The project, designed to recognize and honor McTell and the legacy of his music, enhances the art and history of Thomson to draw in visitors to the birthplace and hometown of the famous musician.

For artists, like McTell himself, interpretation is a key element to design and creativity. And for artist Adrienne Antonson, Braille became her muse for designing her guitar.

“I have always been passionate about Braille, I think it’s an amazing tool. I am such a tactile person, so just the touch of it, the feel of it, it’s just so amazing to me that people can understand that from a tactile point of view,” Antonson said, adding that she has also been a McTell fan even before she knew he was a Thomson native.

Through her research, Antonson discovered the complex nature of transcribing guitar chords into Braille.

“The more I read about Braille sheet music and the more I really looked into how it’s transcribed I just knew it was the challenge that I needed to get inspired,” Antonson said.

From there, she ventured onto the Internet to learn how to transcribe her song of choice, McTell’sThe Dying Crapshooter’s Blues.

“The Braille of those guitar chords, it was just so cool. It’s not just like here’s the G, but G is really like an entire line of Braille, saying first finger here, second finger there, third finger here, so it is so much more complicated than I originally thought it was going to be, and yes, it’s a lot of Braille information to represent one guitar chord. It’s been really great. I learned a lot and I have a whole new appreciation for blind muscians,” she said.

Antonson isn’t stopping there. She is also applying several abstract painting techniques to her guitar to bring the music to life, never losing sight of the struggle she imagines McTell and other blind musicians face.

“I really want the visual of this to feel like how I imagine someone who is blind reading sheet music,” sain Antonson. “You don’t have that visual, so in your mind – I’m imagining – that the music feels a certain way and creates a sort of abstract visual in their mind of what the music looks like, so I am hoping the paint technique that I am using, I’m hoping will kind of mirror what I think that that must feel like.”

Antonson said her stepfather, Bob Flanders, longtime Thomson city manager, has served as inspiration for getting involved with the Thomson community she moved to just two years ago with her 1-year-old daughter and husband.

“He’s the best. It’s just been really inspiring for my husband and I, just how involved he is,” said Antonson.

Stokes took a more floral approach to her guitar, incorporating her original camellia painting, which has also been recently added to the Greater Augusta Arts Council community gallery show.

“Our town is the Camellia City, so I thought ‘OK, what if I just did white camellias in shades of blue?’ and the lines of movement kind of give you that feeling of music and activity. They’re very organic kinds of shapes,” Stokes said.

Some aspects of the guitar did create obstacles for Stokes’ design. Keeping the organic flow of lines moving between the tuning pegs on the headstock and filling the sound hole took some time, she said.

The deadline for artists to complete their massive guitars is March 18, when the public will be invited to view all 12 guitars during a free Reveal Party at the Thomson Depot at 6:30 p.m. During the event, Steve James, an expert of the blues style played by McTell, will perform for visitors.

For three years the designed guitars will be featured in other locations in Thomson and McDuffie County as well as in a downtown display with audio samples of McTell’s music.

For more on the exhibit, visit here.