Long John Baldry :: THE BEST OF THE STONY PLAIN YEARS 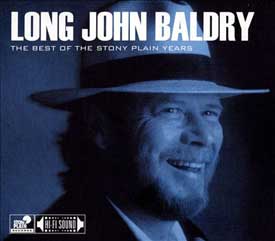 Long John Baldry, The Best of the Stony Plain Years, includes tracks from the Stony Plains Record  vaults, as well as rare and previously-unreleased material.  British blues pioneer Long John Baldry (1941-2005) recorded for Stony Plain from 1991 up until his death. He started performing acoustic blues in London in the late 1950s and worked with fellow leaders of the British blues vanguard Alexis Korner and Cyril Davies in the early ‘60s.

Baldry was an inspiration to The Rolling Stones and Eric Clapton. He mentored Rod Stewart and Elton John, who both produced and recorded on some of Baldry’s early classic albums, Everything Stops for Tea and It Ain’t Easy. Both albums were re-issued by Stony Plain in 2012 with several bonus tracks and rare photos added and are still active in their catalogue.

Long John Baldry’s Best of the Stony Plain Years set includes songs from several of his label releases, as well as two rare and previously-unreleased tracks, plus a duet recorded live with the legendary Jimmy Witherspoon, “Time’s Gettin’ Tougher than Tough” (1995), with backing by the Duke Robillard band. Baldry and Witherspoon were long-time friends, dating back to when “Spoon” visited England on tour in the early 1960s.