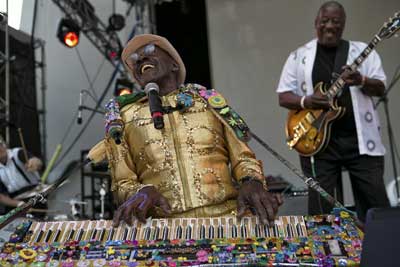 Long lost soul man Ironing Board Sam is the subject of our Video of The Week. The 25-minute documentary, Ironing Board Sam’s Return, tells Sam’s incredible story, from playing the TV show Soul Train in 1965 to Jimi Hendrix sitting in with his band around then; from playing Jazz Fest while submerged in a tank of water in 1979 to inventing the keytar (really). The Music Maker Relief Foundation found him and he moved to Hillsborough, NC. The former New Orleanian is returning to Jazz Fest this year. It’s inspiring, touching, and full of incredible soul music from the ’60s to today.

Produced by Tim Duffy and Tom Ciaburri, the video is a portrait of an entertainer who’s persistence is only matched by his courageous optimism. With an unstoppable soundtrack encompassing his decades long career, it reveals the hard consequences of chasing a dream and the creative renaissance of an unheralded legend.

Thanks to the Kickstarter backers that made this video possible!

After playing professionally for more than 55 years, Ironing Board Sam has amassed a staggering repertoire of both originals and classic blues and R&B songs. A truly gifted and engaging performer, Sam’s powerful, soulful voice and remarkable piano prowess remain undiminished.

Made in the South, with support from the Southern Documentary Fund.