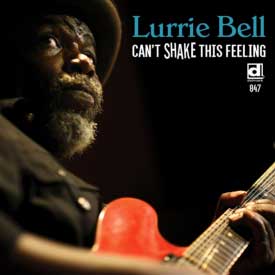 One of the greatest living legends of the blues, Lurrie Bell, showcases all the passion, depth, rawness and uniqueness on Can’t Shake This Feeling. This is a followup recording to his multiple award-winning Delmark CD, from 2013, Blues is My Soul. Motivated by his 2013 Blues Music Award for “Song of The Year” for the title track from that album, Lurrrie had a hand in writing five of the thirteen tracks on Can’t Shake This Feeling. “Driftin'”, “One Eyed Woman”, “Hold Me Tight”, “Sinner’s Prayer”, “Do You Hear”, “Born With The Blues”, “Hidden Charms” and more.