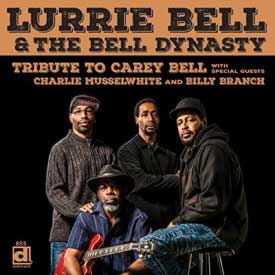 It’s almost 50 years since blues harpmaster Carey Bell released his debut album on Delmark Records. Carey’s children followed him into blues and performed with him often while growing up. Lurrie’s debut recording was with Carey appearing on Heartaches And Pain (Delmark) and he joined with pops again in 2006 to record a live album / DVD, Gettin’ Up. Now Lurrie, Steve, Tyson and James Bell join forces as The Bell Dynasty to present this tribute to their dad, Carey Bell.

Lurrie Bell now has 8 Delmark albums including Can’t Shake this Feeling, a Grammy finalist in 2017, and the 2 collaborations with his father, the legendary Carey Bell.

While Laurie has achieved international status as a world-class blues artist, his brothers are no less talented. Steve Bell is an amazing harmonica player currently a member of John Primers band. Bassist Tyson Bell has worked with Shawn Holt and brings a rock-solid bottom to the CD. Drummer James Bell has a unique sound. James also sings 3 songs on the album including the original “Keep Your Eyes On The Prize.”

Individually all these guys are great but put them together and the music goes to “a whole ‘nother level.” After all, they’ve been playing together as long as they can remember.

The Bell/Delmark connection comes full circle with this release. But whether the listener knows or cares about the fascinating backstory, this really stands on its own as an outstanding example of the best of Chicago blues today.