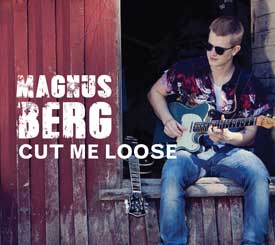 The blues literally reaches across all boundaries. Adding to its seemingly mystic power to entrance musicians is the ongoing phenomenon of amazingly young aspirants. Sensational 18-year old Norwegian guitarist Magnus Berg began playing at seven, performed onstage at 12 and played Buddy Guy’s Legends in Chicago at 17. During his family’s yearly sojourns to the warmth of Florida, and as touring US artists would pass through Norway, Berg began to catch the eye of many in the blues community at a very young age. In late 2012, singer/songwriter Kirsten Thien was captivated by Berg’s guitar solo during his cameo appearance with Mike Zito in a Blues club in Florida. This chance meeting would be the start of a cross-Atlantic collaboration as Thien began co-writing with Berg and added his blazing lead guitar work to her live band. To date they have toured together in the USA, Norway, France, Germany, Belgium and The Netherlands. All the while, Berg also leads his own band doing shows in Norway while finishing high school. As the new record took shape, Producer Erik Boyd was recruited to produce and Thien eventually signed Berg to her label, Screen Door Records. They inked the deal on a rainy day in Brittany as their August European tour came to a close.

The Muddy Waters standard “Hoochie Coochie Man” is inventively re-imagined with saucy slide guitar in a raunchy arrangement. “St. Pete Boogie” lifts the spirits via a propulsive classic boogie riff in an inviting road song. “One Too Many” closes the invigorating set with a finger-popping jump blues, his aggressive guitar licks underscoring romantic desperation.

Every new contemporary musician dedicated to the blues is cause for celebration. When one as talented and genuine as Magnus Berg explodes on the scene it is a remarkable event. His robust debut displays maturity and true blues expression well beyond his years in what promises to be an outstanding career.