Marcia Ball :: THE TATTOOED LADY AND THE ALLIGATOR MAN 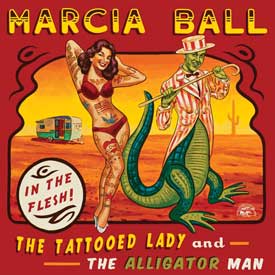 Award-winning pianist/vocalist/songwriter Marcia Ball newest release on Alligator Records CD is The Tattooed Lady And The Alligator Man. The Texas-born, Louisiana-raised Ball has earned worldwide fame for her ability to ignite a full-scale roadhouse rhythm and blues party every time she strolls onto the stage. Her groove-laden New Orleans boogie, deeply soulful ballads and rollicking Gulf Coast blues have made her a one-of-a-kind favorite with music fans all over the world.
On The Tattooed Lady And The Alligator Man, Ball draws listeners deep into her music with instantly memorable melodies and imaginative imagery. Her songs paint vibrant musical pictures, richly detailed with characters, flavors and scenes straight out of Louisiana and Texas. With raucous horns punctuating Ball’s legendary piano pounding and emotional, melodic vocals, the new CD mixes Ball’s New Orleans R&B, swampy Louisiana ballads, and jumping, Tex-Mex flavored zydeco into a one-of-a-kind musical gumbo, a sound she has been perfecting over the course of her four-decade career.

From the poignant Just Keep Holding On to the fresh start of Clean My House to the surprising and timely The Squeeze Is On to the southern warmth of Human Kindness, Ball has delivered a set of songs so well written and so well performed, she’ll astound and delight her longtime fans and give newcomers plenty of reasons to join the party. Featuring her stellar, road-tested touring band, with help from friends Delbert McClinton and Terrance Simien and production by Grammy-winner Tom Hambridge (Buddy Guy, Joe Louis Walker, James Cotton, Susan Tedeschi), The Tattooed Lady And The Alligator Man is happy, moving, joyful, stirring, thought-provoking, danceable and fun.

After a 1978 solo LP for Capitol and a successful series of releases on Rounder, Ball joined the Alligator Records family in 2001 with the release of the critically acclaimed Presumed Innocent. The CD took home the 2002 Blues Music Award for Blues Album Of The Year. 2004’s So Many Rivers, 2005’s Live! Down The Road, 2008’s Peace, Love & BBQ and 2010’s Roadside Attractions all received Grammy Award nominations as well as critical and popular acclaim. In 2010, Ball was inducted into the Gulf Coast Music Hall Of Fame and in 2012 into the Louisiana Music Hall of Fame. She’s received a total of seven Living Blues Awards and nine Blues Music Awards (and has earned a whopping 42 nominations).

The New York Times says, “Marcia Ball plays two-fisted New Orleans barrelhouse piano and sings in a husky, knowing voice about all the trouble men and women can get into on the way to a good time.” Living Blues declares, “Her originals sound like timeless classics and southern soul masterpieces that no one else can imitate.” Of the new album, Ball says, “I don’t make a record until I have something to say, stories to tell, messages to impart. I try to make records that are true to me,” she continues, “and this one couldn’t be truer.”