Markey Blue :: THE BLUES ARE KNOCKIN’ 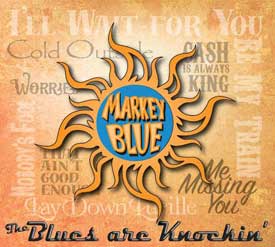 With their new release, The Blues are Knockin’, Markey Blue takes us on a gratifying trip through several different styles of Blues. After signing a TV publishing deal, the duo was approached to compose several blues-styled songs to be pitched for specific television shows. Within the four days they were given to write, record, mix, master and send out each song, a good part of “The Blues are Knockin’” was born. The album explores Delta, Texas, Memphis, Kansas City, Rock and Soul Blues. The creativity and craftsmanship of this duo shines through-out this entire musical journey.

The Blues are Knockin’ has something to offer even the most discriminating blues pallet.

From the swampy Delta slide work of Ric Latina on “I’ll Wait for You”to the traditional Kansas City slow blues of “Worries,” and featuring the only track that was recorded live at Ocean Way Recording Studio Nashville, the rockin’ blues song,“That Ain’t Good Enough.”

The album includes two tributes songs written for two blues masters that have passed on.

“Lay Down Lucille” was written for Mr. B.B. King and his beloved guitar Lucille, and “Be My Train” in honor of Little Milton.

Markey Blue takes a more serious approach with a song titled “Nobody’s Fool” that reflects the growing unrest that we have all been watching unfold on TV during the morning news. So take a ride on this transmigration of Blues though the artistry of Markey Blue.

“There is a bit of Mississippi Delta, a bit of Chicago Blues, a little bit of Soul, but a whole lot of Markey Blue. Their new release, The Blues are Knockin’ takes no prisoners.”

“With their new album The Blues Are Knockin’, Markey Blue takes a cruise though the soulful side of the blues, with echoes of the Delta, Memphis and Muscle Shoals reverberating though ten original tunes. Co-leaders Markey on vocals and guitarist Ric Latina, are a formidable team.” Ted Drozdowski, Nashville Scene

The Nashville based duo of Ric Latina and Markey has a combined performing/touring history that reads like a “who’s who” in the entertainment industry. Combining their writing skills, studio creativity, and explosive high energy live show, Markey Blue has become a dynamic force to be reckoned with. Since their first release, Hey Hey, in late 2014, the duo has literally caught fire in a whirlwind of life-changing events:

One month after release all 12 tracks receiving air play.

Three songs on the new album picked up for TV placement

Song gets featured in a movie “Turbulence and Love”