Markus James :: HEAD FOR THE HILLS 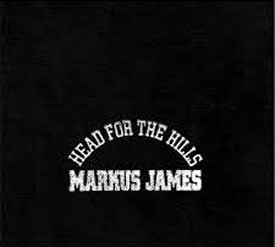 “After my Nightbird album came out in 2003, I started getting offers to go out and play, and one of them was from the University of Southern Mississippi in Hattiesburg,” recalls Markus James. “I went down there with one African musician and the reaction we received was so great, and I noticed that nobody was asking questions about the connection between traditional West African music and Blues; the people there just dug the music and they let us know.  After that, I started traveling more and more to Mississippi and meeting musicians there, and I was especially drawn to some of the old-school drummers of North Mississippi.”

After performing in Mali, West Africa one year, James had an epiphany about the connections between what he’d heard there and some of the North Mississippi Hill Country music he saw and heard in the film made from Robert Palmer’s classic book, Deep Blues. “I came back to the US, saw the Deep Blues film, and was amazed to see the exact same thing that I had just seen in the sand dunes outside Timbuktu: three drummers and a guy playing what they call a cane flute.  It was just such an obvious connection between the musical traditions I had been immersed in in West Africa and some of the traditional music in North Mississippi. I was on my way back to Mississippi, this time to perform in Oxford at Ole Miss, and this whole process led me to seek out, record and eventually start performing with some of these great drummers. Traditionally, in North Mississippi, like in West Africa, music is part of life; it’s not just some ephemeral entertainment like a song on the radio, and these guys also do other things like farming, construction, making white lightnin, etc.  They are not slick session players who work in studios in a city. So, having recorded in all kinds of rough environments in West Africa, I felt right at home setting up mics on a porch, hanging mics from barn rafters, in a carport, and just rolling; and this seemed perfectly normal to them as well.

“I must have watched the first part of the Deep Blues movie (about North Mississippi) a hundred times; and when I found myself playing with Calvin Jackson in Sherman Cooper’s potato barn in Como, it was like a dream come true. How this all came to pass is a long story. I had befriended the late, great Jessie Mae Hemphill and visited her several times in Senatobia. She loved the film I had made, (Timbuktoubab) and the African instruments we were playing. We had a great time hanging out and singing together. Jessie Mae told me about what she knew of the Africans in her family and about traveling and playing with her grandfather, Sid Hemphill, who is documented in the Library of Congress. Jessie Mae and I were preparing to record together in her trailer, but when I showed up the last time she was on her way to her final resting place.”

James had similar encounters with many of the drummers who’d wind up on his new CD. Kinney Kimbrough had stayed at James’ place in Northern California when he was on tour with another band. They had started recording then, and later in Como, and yet again in Holly Springs, when Markus stayed with Kinney’s family and they recorded in his open-air carport. James and Kimbrough have gone on to perform live as a duo (Beale Street Music Festival, Sonoma County Blues Festival), and Kinney appears in several videos from the new album. Markus also recorded with Aubrey “Bill” Turner and R.L. Boyce, both of whom were mainstays of fife and drum music in North Mississippi.

“I have recorded a lot of things with these drummers over the last eight years” says James. “The music on this album includes some of these recordings that work with the theme of the album. One of the highlights of this recording process was when I reached Calvin.  After talking for a while and telling him I was also doing some acoustic things now with my gourd banjo, he suggested he could hambone, so I drove out to his family property in Luxahoma, where we recorded on his sister’s porch, with him hamboning while I played gourd banjo and cigar box.  He also said buckets, pots and pans were the first things he had played when he was a kid, so we found two five gallon buckets and recorded with him playing those on the porch.  (The sound of feet stomping on the porch was awesome).   Each of these drummers has special unique qualities, but they are all connected to the rich musical traditions of Hill Country Music.  This is different from Delta Music and it’s not for me to try to explain what that’s about, but I feel that the differences are profound.  The Hill Country is a beautiful place, with lots of trees and shade, somewhere you would want to be, especially if you found yourself in the sweltering Delta or in the big city and out of luck.”

Markus James has been recording and performing original, blues-based music with traditional West African musicians since 1994, when he first made his way to Niafunke, the northern Mali village that was home to the legendary African bluesman Ali Farka Toure. His five critically-acclaimed Mali-based albums have been warmly received all over the world and he had tracks included on two European compilation sets that also featured Robert Plant, Ali Farka Toure, and Tinariwen, among others.  His work with three traditional Malian music masters was the subject of the award-winning documentary film, Timbuktoubab, which was seen on PBS stations around the U.S. His last album, Snakeskin Violin, featured collaborations with trance groove hunters and a shaman in Mali, as well as Calvin Jackson in Mississippi, traveling Tamasheks in California and African Diaspora musicians in the U.S. Featured on NPR’s “All Things Considered,” the album also drew rave reviews from Billboard, Living Blues and the “House of Blues Radio Hour,” among many others.