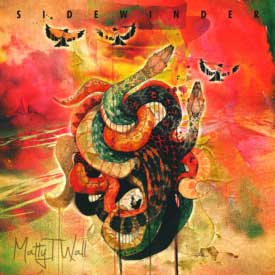 The electrifying guitar of Matty T Wall extends from his native Australia to the world. With the release of his latest collection, Sidewinder, Matty is writing a new chapter in the musical narrative, revealing the power of his expanding artistry through guitar, voice, band and songs.

Key to the sound of Sidewinder is the presence of legendary Grammy-winning producer-engineer Bob Clearmountain. Famed for his work with the Rolling Stones, Bruce Springsteen and David Bowie among hundreds of other platinum artists, it is testimony to Matty T Wall’s musical integrity that Clearmountain provides the sonic sparkle that reveals Sidewinder in all of its gritty glory.

Only two years since Matty’s 2016 album Blue Skies, this creative period has been a whirlwind of productivity for the Perth, Australia native. As an enthusiastic audience discovered his music, the press responded with phrases like: “virtuoso,” “everything a true music fan could possibly ask,” and “one of the most inspired musicians of this generation.”

Matty recalls that as a young musician, the bone crushing metal of Metallica, Pantera and Sepultura was his first love, as his devotion to the genre came into full bloom when he discovered AC/DC. As his tastes evolved, he studied jazz, Gypsy jazz and flamenco – all nuances that can be detected in his sound.

But it was his connection to the blues that formed the most substantial bond – from his father’s collection of Clapton, Hendrix and Zeppelin to the originators: Buddy Guy, Albert Collins and Junior Wells. “Blues has to be honest and totally direct in delivery,” Matty says. “It has to cut straight to the heart of emotion. Because of this, you can’t get too clever with lyrics or too tricky and technical with the music. Blues keeps me grounded with my writing, otherwise, all of those other influences could very easily take over.”

With performances in venues of all sizes – intimate clubs to massive festivals – Matty, working with bassist Stephen Walker and drummer Ric Whittle – adjusts his approach accordingly. “Explosive sets are the most fun part of doing festivals,” Matty explains. “Short, sharp, explosive performances.  I have plenty of those songs up my sleeve to accommodate and I really enjoy playing this type of set. But, because I also have many slow and emotional blues songs, I still really enjoy playing jazz and blues clubs so I can stretch out with the songs I choose to play. Of course, If I am doing a two-hour festival set, which I have done many times, you will get to see all my sides.”

Indeed, with his newest release, all of the sides of Matty T Wall are in full frame. A young man with a reverent link to his lineage and a vital musical vision for the future: With Sidewinder, Matty T Wall turns it all the way up,