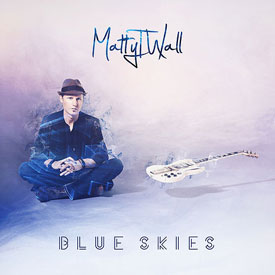 Blistering fretwork, soulful vocals and sterling songcraft: with Blue Skies, his debut release, Matty T Wall pays homage to the masters of the blues while carving his own distinctive signature into the walls of this rich musical legacy.

From Perth, Australia, Matty originally discovered his chosen genre while exploring the roots of rock. As a disciple of musical history, his artistry traces tributaries of his influences back to their sources – from Robert Johnson to Jimi Hendrix — while delivering a fervent, modern take on a deeply traditional form. A ferocious band ignites a slate of songs that retain a rough and ready live quality with a potent rhythm section and swirling keyboards framing Matty’s signature guitar and confessional voice.

Incisive, engaging and adventurous, Matty T Wall is a young man with an old soul and new music: With his debut release, he blows away the clouds to reveal Blue Skies.

As a guitarist, Matty wrings raw emotions from single notes, stretching and bending the strings of a 1961 Les Paul Custom into sounds both persuasive and human. While he is capable of blazingly fast leads, he also drives the beat with percussive punctuation and solid assurance.

With his vocals, he coils along the lines of the guitar. “I enjoy using my voice as another instrument,” he avows. He says that his songs are primarily riff-driven, and he compiles his musical notations into a catalog of 50-100 concepts that he can call up when lyrical inspiration strikes.

While the music that Matty plays has roots in the past, he is a very much an artist in the present. Through his reverence for historic musical forms, he is not emulating, but redefining these sounds, as he introduces classic genres to new listeners and invests them with his own trademark.