Michael Falzarano :: I GOT BLUES FOR YA 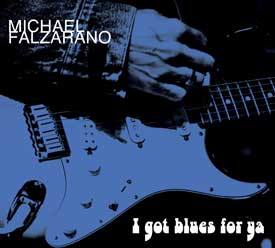 Singer/songwriter/guitarist Michael Falzarano has been up and down and all around for the better part of five decades and his tough, soulful music confirms it. Stints with Hot Tuna and the New Riders of the Purple Sage among others, add depth and substance to his art. His original song, “Where There’s Two, There’s Trouble” appeared in the feature film Blue Caprice in 2013 and on Jorma Kaukonen’s 2015 Red House release Ain’t In No Hurry while his rollicking forth solo release blasts him to the top.

The grinding blues “The Night King Curtis Died” is a worthy tribute with Falzarano growling emotionally and Daily’s slide guitar screaming in anguish. Roaring guitars intensify the heavy title track. The gently swaying “I Never Think About You” features some conversational poetry and a stinging, six-string rebuke from Colow.

Every noted bluesman kicks the boogie and the dangerous “Snake Box Boogie” strikes with the “Professor’s” driving piano and the call to get down. Guitar hero Kearney contributes slippery slide to “Big Fish” as Falzarano drawls sarcastically. Believe the boss singer on the rousing shuffle “We Got a Party Going On” when he exhorts “We got the whole joint rocking, champagne corks popping, everybody’s having a ball…”

On “Good, Good Lovin’” Falzarano declares lustily “Out on this highway got my wheels on fire. I’m rolling towards you with a burning desire for some good lovin’” while Daily adds heat on slide guitar. The hypnotic, insinuating “Crossroads Avenue” re-imagines blues mythology. Kearney rips hellish licks on “The Devil’s Gone Fishin’” with Falzarano’s passionate testimony. “Well, the devil’s gone fishing and got my baby on the hook, with his wicked grin, one look is all it took.”

Michael Falzarano’s unsurpassed passion and bottomless reserve of musicality belies the seemingly effortless delivery served up with every note he sings and plays. Blues this exhilarating and deeply moving are to be enthusiastically embraced.