Michele D’Amour and the Love Dealers :: LOST NIGHTS AT THE LEOPARD LOUNGE 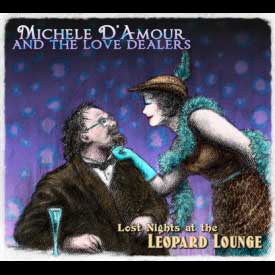 Have you listened yet? “Michele D’Amour and the Love Dealers’ new release, Lost Nights at the Leopard Lounge, is a soulful throwback to Chicago blues and the juke joints of the Mississippi Delta. D’Amour’s voice can best be related to Bonnie Raitt, but there is a little Marcia Ball in her tone, and the Love Dealers’ expertly mixed blues soul and funk to give the new songs a little something extra for the listener.” — Troy Michael, Innocent Words Magazine

“Lost Nights at the Leopard Lounge is a strong album with good songs, talented musicians, and fabulous production…” Blues Beat

“Right from the excellent opener, the up tempo shuffle of ‘No Good’, the songs are all originals, intelligent and interesting, well sung by Michele whose voice is flexible and convincing, ranging from the strong slow blues of ‘Trouble’ to the ever-so slightly pop tinged ‘When The Blues Come Calling’.” Norman Darwen, Blues in the NW

“A white girl from Seattle that somehow has become possessed by Koko Taylor, D’Amour keeps it tight and hard hitting whether she lays back or kicks ass. A solid crew that knows their way around modern electric and rocked up blues, this is a first-class party on a platter that knows no bounds when it comes to how hard and far it can push. A stone good time throughout.” — Chris Spector, Midwest Record

Seattle-based blues singer-songwriter Michele D’Amour began writing songs at the age of six and hasn’t stopped since. Michele D’Amour and the Love Dealers’ third album celebrates the band’s fifth anniversary with a new crop of originals. The band worked with Grammy-winning engineer Steve Feasley on the recording.

Lost Nights at the Leopard Lounge is a compilation of stories rooted in real life experiences and expressed through the blues tradition. “I am an avid collector of characters and stories,” says D’Amour. She also co-wrote two tracks, “I Didn’t Know” and “Last Man Standing,” with Cory Wilds.

The song “Leopard Lounge” evolved from the band swapping anecdotes about colorful venues they’ve played and people they’ve seen; manifested in a fictional club that artist Tim Sutherland depicted in the album art.

Other songs explore love gone wrong: “Trouble;” “No Good;” “What the Cat Dragged In;” and the anthem “Last Man Standing.” “Move on Down the Line” discusses when it’s time to get out of a bad situation; “All I Do Is Work” and “Blue as Blue Can Get” are songs for the downtrodden. “Lost My Mojo’ is my take on being a ‘woman of a certain age,” laughs D’Amour. “I Didn’t Know” tackles the feeling of being disillusioned with the music scene, while “When the Blues Come Calling” is a light-hearted exploration of what it might be like if “the blues” behaved like a pesky house guest. “Black Cat Boogie” was originally written for children when the band played a series of summer family events, and has since been embraced by cat aficionados.

Throughout, Patrick McDanel on bass (Red Hot Blues Sisters), with the band since its inception; and new addition Ronnie Bishop on drums (Michael Powers) provide the band’s signature groove-oriented sound. Ryan Higgins joined as the band’s guitarist in fall 2016 and developed the signature licks for many of the tunes. McDanel and Higgins also contribute horn parts to two of the songs.