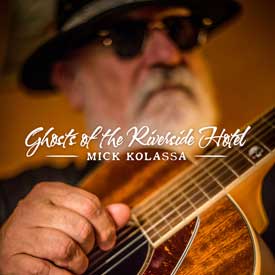 Mick Kolassa, whose 2014 release Michissippi Mick received critical acclaim and significant airplay, has produced Ghosts of The Riverside Hotel, another blend of original songs with very original covers, and delivers it with a musical powerhouse of performances and performers.

Mick and Producer Jeff Jensen have once again put together a collection of songs that touch on and draw from many blues styles. From the West Coast swing of “I Always Meant to Love You” to the Blues-rock infused update of the Hank Williams classic “Ramblin Man” to the laid back acoustic blues of “If I Ain’t Fishin” it’s easy to see that Mick loves blues of all kinds. He has reworked a rock classic into its blueiest form yet with his take on “Mama Told Me Not To Come” and has also taken a depression era standard and given it the respect and gravity it has deserved with his performance of “One Meatball.”

Taking full advantage of his tastes and experience, Mick has created lyrics and melodies that encompass a variety of emotions and blues stylings, and delivers vocal performances that complement every song. Together with the musicians who helped him put this together, Mick has once again delivered a real feast for his listeners. Ghosts of The Riverside Hotel is a celebration of the blues in all its glory, with support by some of the genre’s fastest rising stars.

This album is a labor of love; 100% of the net proceeds will go to The Blues Foundation, split between two very important programs: the HART Fund and Generation Blues. Go to www.blues.org to find out how you can support the blues.