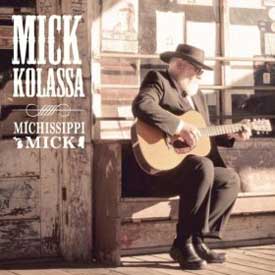 Michissippi Mick is Mick Kolassa, a lifelong musician and hardcore blues fan who is also on the Board of Directors of the Blues Foundation and an active participant in the Memphis Blues scene. Born in Michigan, Mick has lived in Mississippi for over 20 years.

This album is a labor of love; 100% of the gross proceeds will go to the Blues Foundation, split between two very important programs: the HART Fund and Generation Blues.

Mick has recorded a blend of original songs and added in a few surprise covers. With songs ranging from the rock-solid electric blues of “Blowtorch Love” to the jug-band style reworking of WC Handy’s classic “Beale Street Blues,” this album gives the listener a taste of many styles of the blues.

Mick and Producer Jeff Jensen have reworked the rock classic “The Letter” into a slow blues and brought it back to Memphis, and in their hands the Johnny Mercer Jazz standard “Blues in the Night” is given its bluesiest take ever. The album incorporates several blues styles and forms, taking full advantage of Mick’ tastes and experience as well as the talents of the amazing musicians who helped him put this together.

Michissippi Mick is a celebration of the blues, with support by some of the genre’s fastest rising stars. Produced by Jeff Jensen, who also is featured on lead guitar, Jeff and Mick assembled a dream team with Bill Ruffino on bass, Doug McMinn on drums, and Chris Stephenson on organ. This core band was joined by such notables as Victor Wainwright, Brandon Santini and Eric Hughes. Also contributing their vocal talents are Reba Russell and Redd Velvet.