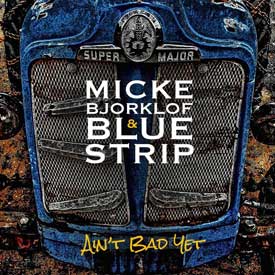 Ain´t Bad Yet is the sixth album by the Finnish Blues Award-winning (for “Best Band”) blues-rock group Micke Bjorklof (pronounced Be-York-Loaf) & Blue Strip. The record was produced by John Porter, legendary for his productions of Buddy Guy, B.B. King, Taj Mahal, Keb’ Mo’, Santana, and no less than 10 Grammy-winning albums.

The band traveled to Rockfield Studios in Wales to Ain’t Bad Yet. The studio has played host to many of the world’s biggest artists from Black Sabbath to Rush and Oasis, and which, in 1975, was the primary studio Queen used for the recording of “Bohemian Rhapsody.”

“We’re really excited about the new material and about this collaboration with John Porter,” Micke Bjorklof says. “We’d been talking about doing a project together for a couple of years, and I´m glad we finally could make this happen.”

Micke Bjorklof & Blue Strip is a well-established name in their native Finland and throughout Scandinavia, where they have been ambassadors of blues music for more than 20 years, recording and stirring up audiences with their energetic live shows at smoky blues clubs and large festival arenas. Throughout their career, they’ve had the privilege of performing on stages around Europe in the presence of B.B. King, The Fabulous Thunderbirds, Solomon Burke, Robert Plant and many other legends.