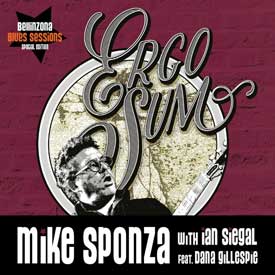 Italian blues musician Mike Sponza recorded Ergo Sum — the title is Latin for “Therefore I am” — at London’s famed Abbey Road Studios, with two very special guests: the legendary British blues vocalist Dana Gillespie, whose career dates back to the 1960s, and multiple Blues Music Award- nominated guitarist and vocalist Ian Siegal, who has worked closely with such blues-roots acts as Jimbo Mathus and North Mississippi Allstars. These 8 songs on Ergo Sum were translated from Latin poems carefully chosen by Sponza, and with the assistance of Ian and Dana were crafted into contemporary blues songs for all of us to appreciate!

“Human passions have no age,” Sponza writes in the liner notes. “I’ve discovered there’s a trait d’union between the ancient poems of Catullus, Horatius, Martialis, Juvenalis and the lyrics of Willie Dixon, Muddy Waters and Bob Dylan. In a thousand years, the questions will be the same: It could be love, friendship, politics, family … and I’m sure the answers will be the same, too. Because man will never change. Luckily.”

Reviews of Sponza’s recordings and live performances have been universally enthusiastic. He’s one of a small number of musicians able to play the blues by observing and feeling, deeply, everything that happens around him. He seems to have an innate capacity of seeing beyond conventions and patterns, finding new ways to express himself that expand the blues genre rather than confine it.

Mike Sponza has been involved in an unusually large number of prestigious collaborations. He started the “Kakanic Blues” project in 2005, creating an album that received glowing reviews from around the globe. Kakanic Blues 2.0 was released three years later, with the participation of 25 musicians from Italy, Austria, Slovenia, Croatia, Serbia, Hungary, Ireland, Great Britain and the United States. And in 2011, Sponza issued Continental Shuffle, where musicians from all over Europe exchanged original songs.

”This music is sooo good! A great mix of blues, jazz, soul and gospel, held together by the masterful guitar playing of Mike Sponza.” -Markus Fischer – Osnabruck Radio (Germany)