Mike Zito & The Wheel :: SONGS FROM THE ROAD 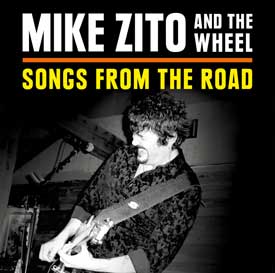 The natural habitat of the true musician is not the gleaming studio, a glitzy showbiz party or a five-star hotel. It’s the road. And if multiple Blues Music Award winner Mike Zito had a dollar for every mile of tarmac he’s burnt since his breakout in the early-’90s, they’d be piled up to his chin. “There’s just something in me,” considers the solo bandleader and Royal Southern Brotherhood co-founder (with Devon Allman and Cyril Neville), “It’s there in all musicians. You gotta love the road to be a part of this world. You’re right there, looking in people’s eyes, swapping stories, shaking hands…”

Zito’s Songs From The Road is a two-disc set from Ruf Records’ Award winning live series that captures Mike at full throttle on his adopted home-turf. “This DVD and live album were recorded on January 10th, 2014, at Dosey Doe at The Woodlands, TX, to a sold-out crowd of crazy Texans,” he recalls. “The audience was on fire from the first note. The band played with such energy and passion. I was overwhelmed many times throughout this performance by the sheer energy of love that poured out of every soul in that building. It was a truly magical night, one I’ll never forget.”

Mike Zito And The Wheel: Songs From The Road captures the push ‘n’ pull between Mike and his all-star lineup of Jimmy Carpenter (sax/vocals), Scot Sutherland (bass/vocals), Lewis Stephens (piano/organ) and Rob Lee (drums/percussion). “With the guys in The Wheel,” explains the bandleader, “we’re all on the same page. We’re not interested in solos, we want to play together.”

True enough. Ask Mike for his backstory and he’ll give you the cold, hard truth. In his own words, the bandleader “grew up poor in St. Louis”; in a blue-collar family whose father logged 40-hour weeks at the local brewery. Ten years working at a downtown guitar shop, under the tutelage of an older employee, exposed him to titans like B.B. King, the Allmans and Eric Clapton (and from there, Joe Pass, Robert Johnson and Blind Willie Johnson

Songs From The Road proves, that endless freeway is still a siren-call that this lifelong road-dog can’t ignore. “The road is part of the story,” he concludes, “and that’s why there are so many songs about it. When a tour ends, I can’t wait to get home. But by the week after, I’m itching to get back out there. It’s like the song says, the road never ends.”

A Listener's Guide to Blues Appreciation Peaches and Crime :: DO BAD THINGS