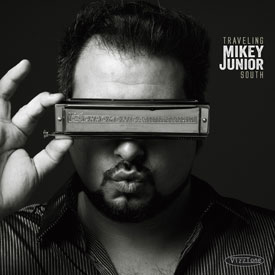 Produced by Dave Gross for SwingNation/VizzTone, Mikey Junior’s Traveling South has a level of depth, maturity, restraint and musicality that reaches the soul through his impassioned vocals, bringing a whole new dimension to his already impressive catalog. Well-written originals and choice covers are brought to life with a vision that truly separates Mikey from his contemporaries.

Traveling South reveals a young blues artist at the top of his game, telling stories we can all relate to, while drawing us deep into the roots of blues music via his utter mastery of the diatonic and chromatic harmonicas.

Self-taught from his impressive collection of blues vinyl, Mikey was a full time musician before he graduated high-school. By the time he was in his early twenties, seasoned players were taking notice and it wasn’t long before one blues society after another scrambled to get him to their stage. Before long, Mikey was a staple of the summer blues circuit on the East Coast..

Who is going to carry the blues well into the 21st century? For blues fans in the Northeast United States, that question is routinely answered every night Mikey Junior hits the stage. His infectious personality and absolute command of his medium leave little doubt the blues is in good hands.