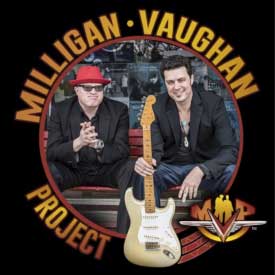 The MVP album features nine studio tracks recorded in Austin at Arlyn Studios and 512 Studios, as well as two tracks taken from their live show debut at the One 2 One club in Austin during SXSW. The studio tracks include originals written by Milligan, Vaughan and producer David Grissom, as well as Buddy Guy’s “Leave My Girl Alone,” “Compared to What” (popularized by Les McCann) and Rev. James Cleveland’s “Two Wings,” a beautiful acoustic gospel tune with just Milligan and Vaughan. The two bonus live tracks include the Grissom-penned “What Passes for Love” and the Freddy King signature tune, “Palace of the King,” that closes the album.

The music on MVP is a powerful mix of blues, soul, rock and funk, with flourishes of jazz and gospel textured throughout. That sound emanates from the musical DNA of both Milligan and Vaughan and manifests itself throughout the new disc, whether it’s the driving kick of “Soul Satisfaction” and “Little Bit of Heaven;” the funky-jazz of “Compared to What;” the rockin’ “Dangerous Eyes;” the flat-out blues of “Devil’s Breath” and “Leave My Girl Alone” (each powered by Milligan’s soulful vocals and Vaughan’s blistering guitar attack); or the tender, soulful ballad, “Here I Am.”

Backing Milligan and Vaughan on the studio sessions are a cadre of all-star players, including Chris Maresh and Jeff Hayes on bass; Brannen Temple and Kenneth Furr on drums; Michael Ramos and Jay D. Stiles on keyboards; Jorge Castillo on guitar; and Mike Cross on background vocals.

MVP is distributed on CD and digitally through CDBaby and The ConneXtion.