Mindi Abair And The Boneshakers :: THE EASTWEST SESSIONS 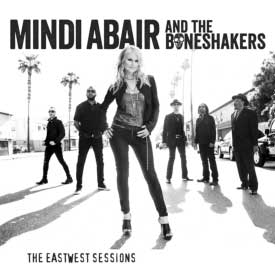 Like many first-class leaders Mindi Abair (pronounced with a long A plus Bear) knows how to surround herself with greatness. She has been electrifying audiences with her dynamic live performances and utter command of the saxophone since her debut album in 2000. No one since Junior Walker has brought saxophone and vocals in one package to the forefront of modern music, with a raucous tone and such dynamic stage presence. After eight successful solo albums, the two-time GRAMMY nominated saxophonist, singer, songwriter teamed up with powerhouse Detroit band The Boneshakers, led by guitarist Randy Jacobs and released the critically acclaimed debut Mindi Abair and The Boneshakers LIVE in Seattle in September of 2015.

The album opens with the thumping soul rocker, “Vinyl,” that is a celebration of love and the power of music, that name checks many of its inspirational characters. Abair and Jacobs share lead lines over the heavy tom tom-driven groove of the instrumental “I’m Not That Kind Of A Girl,” that builds into the sheer abandon of a saxophone house party. Abair spells out her philosophy of self-reliance and determination on the rocker anthem “Play To Win.” Choosing a bump and grind slow blues as her soap box, Abair takes aim at the boy’s club for the blistering rebuke “Pretty Good For A Girl,” driving her point home by sparring with guitar-slinger and friend Joe Bonamassa. For the soul ballad “Let Me Hear It From You,” Sweet Pea Atkinson takes the vocal reins, demonstrating the power and skills he honed as the acclaimed lead singer for Was Not Was, Bonnie Raitt and Lyle Lovett. Some greasy wah-wah guitar mixes with Abair’s saxophone on the opening hook of the inventive almost instrumental Blues Rock anthem “Live My Life,” that features a vocal chorus alternating with scorching solos. The gospel soaked “Freedom,” starts out unfettered then jumps into a ripping guitar riff over a huge drum groove. This ain’t your daddy’s jazz saxophone for sure. The slinky beat from Third Richardson provides the template for Abair’s unapologetic confessional “I Had To Learn The Hard Way.”

Deep blues pioneer Fantastic Negrito joins the crew on the expansive meditation “She Don’t Cry No More,” a brooding work song dug up from the recesses of the human condition, filled with desperate weeping and wailing. Abair then plays a woman scorned on the dramatic “Done Me Wrong,” pouring out her fury with tenacious vocals and blistering saxophone. The playful cigar box guitar-driven country meets New Orleans two step, “I Love To Play The Saxophone,” closes out the session. A sweet back porch sing-along with Abair touting her affection for the horn that has been the love of her life.

The title The EastWest Sessions refers to the LA studio used for recording the album in the city where they all met and started playing together, but upon further consideration what Mindi Abair And The Boneshakers have created is something deeper; a melding of styles and ideals. The tracks are a mixture of old school East Coast R&B swagger and soul meeting modern West Coast jazz and commercial rock sensibility, blended into a new groove for a new age.

“Mindi Abair plays the sax like most guys play the harmonica. There aren’t that many people around that play with that kind of blues enthusiasm. I know I can count on her to help keep the blues alive. She’s such a blues lady that her hometown should be in Mississippi and not Los Angeles. She understands, loves, and protects the blues. She always gives credit to where it came from, especially the black bluesmen.” Bobby Rush