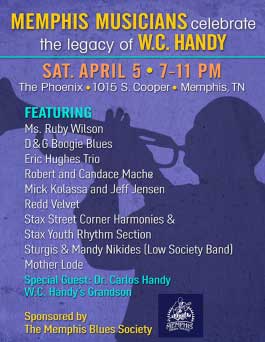 The Memphis Blues Society is assisting producer/director Joanne Fish with the production of local portions of her documentary film about W.C. Handy titled “Mr. Handy’s Blues: A Musical Documentary”. Joanne is filming her documentary in the parts of the United States where W.C. Handy spent much of his life including Florence, AL, Memphis, TN, St. Louis, MO and New York City. A critical part of the Memphis Blues Society’s role is to promote and educate the community about Blues music. W.C. Handy’s story is one that starts at the infancy of documented Blues music. The historical significance of his contribution to the Blues is unmatched. The MBS is taking an active role to assist Joanne Fish with preserving this history and promoting the legacy of W.C. Handy.

On Saturday April 5, 2014 at 7pm, an impressive lineup of Memphis musicians will gather at The Phoenix, 1015 S. Cooper, Memphis, TN to perform a benefit concert, with guest of honor Dr. Carlos Handy (grandson of W.C. Handy). Proceeds from the ticket sales will support the production of the non- profit film “Mr. Handy’s Blues: A Musical Documentary”. 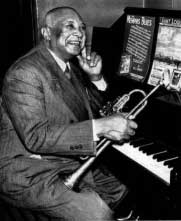 All purchases are tax deductible. Ticket price includes two drinks, light hors d’oeuvres and the concert. If you cannot attend the event, you can still make a donation of any amount to help support this documentary. A donation of $30 or more will buy a ticket for someone who cannot afford one.

For more information about tickets for the benefit concert or how to make a contribution, e-mail Joanne Fish at: mrhandysblues@gmail.com .

If you would like to be a part of the Memphis Blues Society and help with projects like preserving the history and legacy of W.C. Handy, please visit: www.memphisbluessociety.com for more information.