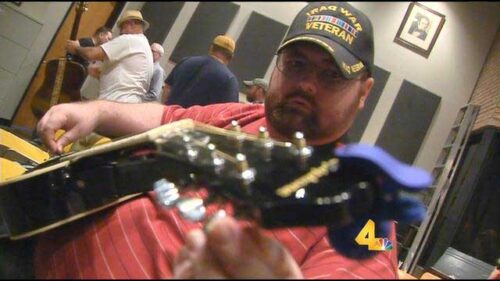 NASHVILLE, TN (WSMV) – A program that helps injured soldiers by teaching them music has just expanded beyond Fort Campbell. Music bursting from a darkly lit room on Music Row, Southern blues was playing loud, then taken down soft and smooth. No one could resist the urge to tap along. For the band playing, it wasn’t their usual venue of playing behind the purple brick and paint-brushed windows of Tootsie’s downtown. Away from stage lights, the audience was all soldiers, veterans and active duty.

“This is my service dog, Scout,” said Adam Zigelhofer, speaking from the audience. “He’s my service dog for a traumatic brain injury, now Parkinson’s and post-traumatic stress disorder. When he knows I’m getting overwhelmed in a situation, he’ll pull me out of it. He’ll alert me, get me out of there.”

Zigelhofer of Fort Campbell has been in the Army 19 years.

With Scout by his side every step of the way, Zigelhofer decided to join SOAR, Sounds of Acoustic Recovery. A class that teaches injured soldiers to play instruments, SOAR was once just a Fort Campbell program. It has now grown into a 501(c)(3) nonprofit with off-post classes in Clarksville and Nashville.

Opening cases and getting turned just right, the soldiers have never played guitar before these classes started, never had the time. With picks in place, downtown musicians helped them to find the right chords.

“It works on your executive brain function and your cognitive association, your motor skills,” said Zigelhofer.

“One of the wives here tonight, she talked about how much it’s helped her husband,” added Byer. “Nothing else has worked, but this has been the one thing that’s worked for him.”

Moved by the words of lifelong singers and songwriters, Zigelhofer said the rooms become a place of healing for everyone who’s pulled up a seat and committed to play every day.

“If it can change a soldier and give him a positive attitude just for one night, then it creates that pebble in a pond,” said Zigelhofer.

All the while, Scout only looked to be close to his soldier, while that soldier made a plan to someday play like that Tootsie’s house band.

Byer said the plan is to hold classes in Louisville and Chattanooga next. Beyond soldiers, he hopes to include police, fire fighters and anyone else who may experience PTSD. For more information on SOAR, click here.