My Own Holiday :: REASON TO BLEED 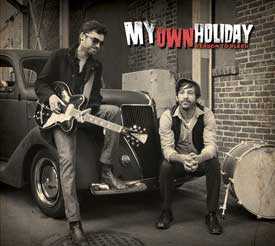 My Own Holiday hails from Lake Arrowhead, California an inland resort community far enough away from the superficial glitz and glamour of Los Angeles to have allowed the band to create their own unique sound unpressured by any of the trendy bandwagon jumping that is de rigueur in the showbiz Mecca. Vocalist/guitarist Chrisman has been writing original songs since he was in sixth grade, and over the years has honed his craft to create an original voice that incorporates influences from classic rock, post-punk, pure pop, and Dylan-esque folk among others, often infused with a darkness and danger that belies the relatively bucolic surroundings of his upbringing. Drummer Bartolo meshes perfectly with Chrisman’s vision, laying down a rhythmic drive that is both in-the-pocket and dramatic enough to push the music into previously uncharted territory.

Their self-described “broken-down” approach to their music emphasizes the propulsive drive and relentless groove at the core of their sound, while at the same time putting the focus on the songwriting. The band’s minimalist approach leaves little opportunity to hide flimsy material behind instrumental gymnastics and gimmickry – without great original songs, little else matters. And My Own Holiday has the ‘great originals’ category sewn up, with songs strikingly evocative of love, loss, hope, longing, sin and redemption – often in a single tune.

My Own Holiday distills a large portion of the best that rock music has had to offer over the last half century into a compelling sound that is all their own. You could spend a lot of time picking out all the various influences, but in the end, it would be a pointless exercise, because My Own Holiday doesn’t really sound like anyone else. They’re an original band, with an original vision, and the only way to really ‘get’ them is to listen. That is most decidedly NOT a pointless exercise – in fact, it’s almost guaranteed to pay dividends.