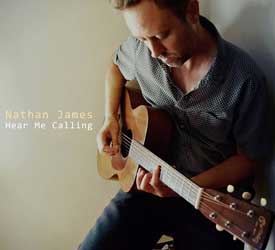 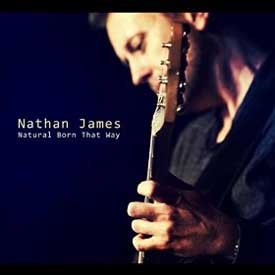 Roots and Blues maestro Nathan James has chosen to showcase both sides of his talents with the simultaneous release of Hear me Calling an acoustic based outing featuring Nathan performing solo in his one man band set up; and Natural Born That Way, a full ensemble recording featuring his band the Rhythm Scratchers with special guests. Both are recorded, mixed and mastered by Nathan at his renowned Sacred Cat Studios, and released on his own Sacred Cat Recordings label. A unique theme is a couple original tunes that feature different versions on both records.

Fans of traditional acoustic blues will delight in Hear Me Calling, a mix of delta and country blues, ragtime, piedmont, and gospel tunes. Instruments played on these mostly originals include: metal bodied National Resonator, a 1956 Martin 00-17 and Nathan’s own invention of Washboard Guitar; along with rack harmonica, foot percussion and his rich vocals. Along with his unique Washboard guitar, another thing that makes Nathan stand out from most solo performers is his modified vintage Skyway suitcase turned into a foot drum set- including foot operated cymbals and a coffee can snare. Everything you hear was played simultaneously by Nathan! Recorded in the dining room of Sacred Cat Studios direct to analog reel to reel tape, the sound is inspired by all the historic field recordings of the 50’s and 60’s by Alan Lomax, Chris Strachwitz and Dr. Harry Oster.