National Women in Blues Showcase, Jan 23 at The Center For Southern Folklore In Memphis 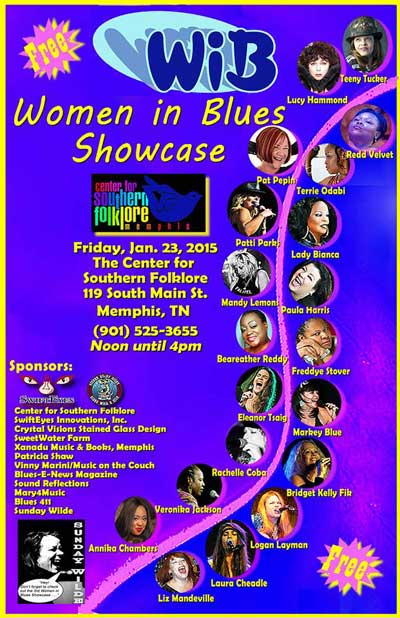 MEMPHIS, TN – Swift Eyes Innovations and the National Women in Blues bring you the 2015 Women in Blues Showcase at the Center for Southern Folklore in Memphis, Tennessee. On Friday, January 23rd, 2015 from Noon until (4 or 5) Women in Blues artists take the stage for their showcase during the annual pilgrimage for the International Blues Challenge run by the Blues Foundation. If it is anything like the last few years, the house will be packed and you will get to see and meet some of the finest women in blues. More than 18 female artists will take the stage and have you tapping your toes, and maybe shedding a joyful tear or two!

The 2013 Teeny Tucker CD, Voodoo To Do You, was released to critical acclaim; “Teeny Tucker is the best female blues vocalist on the scene today,” proclaims James “Skky Dobro” Walker, of Blues Blast Magazine. The CD was ranked number “five” on the March 2013 Living Blues Radio chart. She and co-writer Robert Hughes and her guitarist were selected as finalists in the prestigious International Song-writing Competition, (ISC) for their song “Love Spell” from this CD. Teeny will MC and perform alongside Robert Hughes, her partner in music.

The list of other female artists coming is amazing. Each of these ladies will take the stage to do a two-song set. The WiB has open arms to all forms of Blues and this show will be a broad mix. The lineup to date includes Miss Redd Velvet, Lucy Hammond, Terrie Odabi, Pat Pepin, Lady Bianca, Patti Parks, Rachelle Coba, Mandy Lemons, Markey Blue, Beareather Reddy, Freddye Stover, Bridget Kelly Band, Eleanor Tsiag, the lead singer of the Ori Naftaly Band, .Laura Cheadle Family Blues Band, Logan Layman, Annika Chambers, Paula Harris, Liz Mandeville, Miss Veronika Jackson, Amy Hart and B.B. Queen. The list is not in playing order and more info will be available at IBC. A few extra blues women will no doubt be coming to join in.

The show will start in the main hall in the back at noon and move to the store front around 3pm. Food and drink are available and there is no cover! Bring some money though to purchase these fine artist’s CDs. You just never know who might show up to the Women in Blues Showcase during IBC. We extend our support to the Blues Foundation via membership and encourage you all to join. Without events like the International Blues Challenge, you would be hard pressed to see so many amazing Blues artists from around the world. WiB focuses on the Women in Blues but you will see some amazing male talent playing alongside the many incredible women. None of this would not be possible without the help of Swift Eyes Innovations Inc., Terri Robbins, SweetWater Farm, Xanadu Music & Books in Memphis, Crystal Visions Stained Glass, John Lowe, Patricia Shamroy Shaw, Sound Reflections, Mary4Music, Vinny Marini/Music on the Couch, Blues-E News Magazine, Sunday Wilde, and Blues 411.