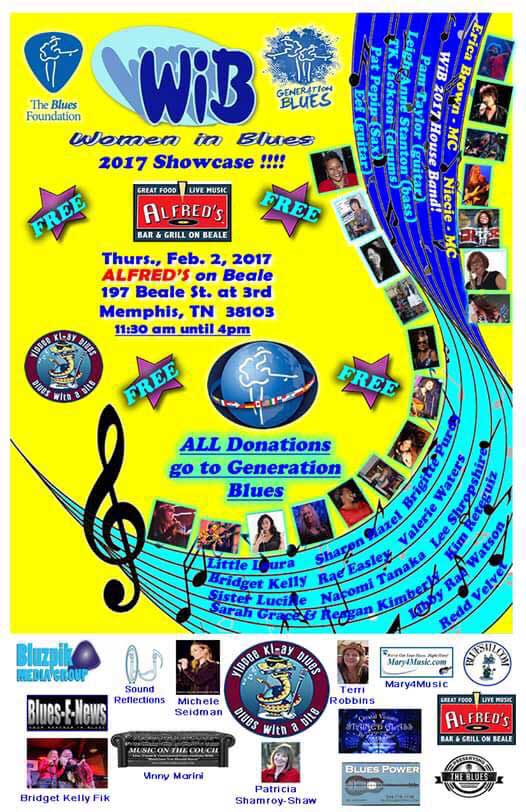 This will be our 2nd year at Alfred’s on Beale and we are excited that our showcase and livestream interviews will all originate at this Beale Street venue. Enjoy Alfred’s hospitality while watching our incredible female artists perform in the showcase or enjoy sitting in while we interview them and their sisters in blues from all around the world.

This year’s lineup is packed full of talent. Michele Seidman and Terri Robbins are pleased to be bringing back our favorite blues storyteller, Redd Velvet (featured in the September Smithsonian Magazine) to close and we are trying something new to open the show. Our MC Erica Brown (also featured in the same issue), will do an opening set to warm up the crowd backed by our first ever, all female house band, lined up by Janelle Frost. The band includes Pam Taylor, Eef, Tk of Southern Ave, Leigh Ann Stanton and Pat Pepin. They will also back up some of our artists who came to town, without their own bands in tow.

Also on hand will be Niecie Blues to introduce MC Erica Brown and our house band. Our performers are Women in blues, both in the IBC challenge and out. From mature to youth, from the States and as far as Japan. This is an event that is sure to get you excited.

Through this event, all of our female artists get to feature their own talents and support their sisters in blues. We have some fine brothers in blues along for the ride, who know we share our spotlight, as long as you don’t take it away!

The National Women in Blues is now a 501(c) 3 and welcomes any support we receive. This year’s main sponsor, Yippee Ki-ay Radio, has been a huge help in so many ways. Not to mention sponsors and support from Michele Seidman (WiB CBW) and Terri Robins (WiB VP), Crystal Visions – Stained Glass by Terri, Patricia Shamroy Shaw, Bluzpik Media Group, SweetWater Farms, Betsy Lynn Paisley, Mary4Music, Kyle Deibler, Music on the Couch, Broads 4 Blues and Lori Grayboyes, Marie Wilson, Preserving the Blues, Sound Reflections, Mark Caldwell and the Memphis Blues Society, Blues 411, Blues Power, and a huge thank you to Sandy Robertson and Scott at Alfred’s, for lending out such a perfect location to showcase Women in Blues!

We look forward to seeing you all there! Thursday, February 2nd, at Alfred’s on Beale, 11:30-4:00, during IBC week! Help us support the future of blues and provide scholarships and training to young musicians, donate to Generation Blues http://blues.org/generation-blues/. If you won’t be in Memphis, watch for some behind the scenes livestreams during the showcase! Blues woman Tullie Brae is helping us peek behind the curtain. National Women in Blues, a 501(c) 3 Non-profit Based in North Carolina. You can reach us by email, 910-352-7678, and find us at our website, on YouTube, Facebook, and Twitter.