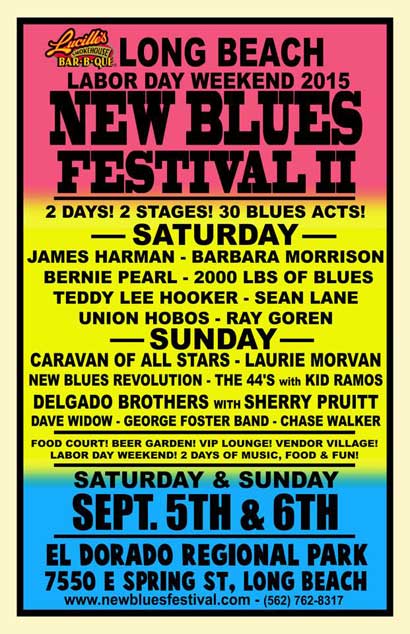 LONG BEACH, CA – The place to be for Blues lovers this Labor Day Weekend is the New Blues Festival II, taking place over 2 days, Saturday, September 5 and Sunday, September 6, in El Dorado Regional Park (7550 E. Spring St.), Long Beach, CA with 2 stages and over 30 acts. Gates open at 9 am and music starts at 10 a.m. each day. Tickets are $25 and available now via the website, at six Lucille’s Smokehouse BBQ locations, including Long Beach, Long Beach Towne Center, and the Cerritos Mall (Lucille’s is the festival’s Title Sponsor this year), and also at the gate both days. Amenities include a huge vendor village, food court; beer garden; and all-new VIP Lounge. Bring the family and settle in amidst the cooling Long Beach ocean breezes!

The festival has expanded due to the overwhelming success of last year’s inaugural NBF, when over 2,000 music lovers of all ages filled POA Park in Long Beach. “Los Angeles and Orange Counties have responded very well to the (New Blues Festival) concept. We definitely hit on a pent-up demand for a long-running inter-generational tradition, and we are excited to once again share all this great music with the public”, says William Grisolia, Producer of the New Blues Festival, whose own band, New Blues Revolution, is one of Sunday’s Main Stage headliners.

More first-class blues each day on the Golden Groove Stage!