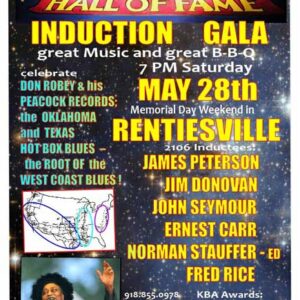 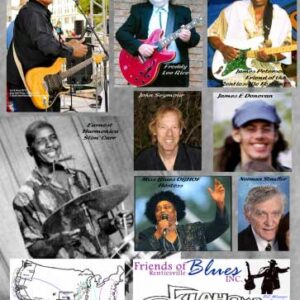 Freddy Lee Rice and Norman Stauffer are scheduled to perform along with other favorite inductees including Miss Blues, Selby Minner, Bucky Young, Wolfman Black, and Leon Rollerson. There will be a barbeque dinner at 7 pm followed by music and the inductions will be spread over the evening. There will also be a silent auction.

Keeping the Blues Alive Awards will also go to Larry Shaeffer, owner of the Cains Ballroom in Tulsa and presenter of the Tulsa Blues Festival for several years, and Donald Robey who had Peacock and Duke Records in Houston and who recorded over 100 OK – TX Blues and Gospel Artists.

The inductees are announced by Selby Minner, wife of the late Oklahoma Blues Legend D.C. Minner. They founded the OBHOF together in 2004. This year’s ceremony will bring the number of OBHOF inductees very close to 100.

The Oklahoma Blues Hall of Fame is at the site of the Rentiesville Blues Festival held annually over Labor Day Weekend and the newly opened D.C. Minner Rentiesville Museum. It is in an historic black township located 5 miles NE of Checotah. Just off US 69, 2 exits N of I-40 and 3 exits S of Muskogee next to the Honey Springs Battlefield Park and Visitor Center.