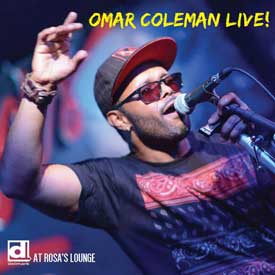 Rooted in the blues and spiked with R&B urgency, Omar Coleman’s Live! At Rosa’s Lounge on Delmark Records contains 10 mostly funkified songs. “We like our blues with a dose of funk, soul and all other kind of stuff,” says Omar Coleman. Eventually these supposedly separate genres run into each other especially with the new generation of blues artists taking over.

Even though it was only available for the second half of the year Omar’s Delmark debut Born & Raised was #15 on Living Blues magazine’s top radio albums of the year. In that LB review of the album Roger Gatch said, “The album bears the mark of an artist who is appropriately confident in his abilities as a singer, harmonica player and songwriter and who is steeped in the classic blues sounds of his home city yet unafraid to take them in a more contemporary direction. It is a pleasure to hear how his sound continues to mature and evolve.”

Omar Coleman was born in 1973 and is a knowledgeable and committed carrier of the Chicago blues tradition. He was nominated Most Outstanding Musician – Harmonica by Living Blues in 2015. He’s a regular performer at Buddy guy’s Chicago.