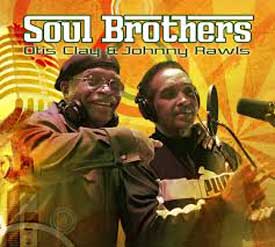 Soul Brothers (Catfood Records) features Blues Hall of Fame singer Otis Clay and Blues Music Award winning vocalist Johnny Rawls for what promises to be one of the musical highlights of the year.

The 10 tracks on Soul Brothers showcase original songs from Rawls, Clay, Trenchard, Al Basile, Darryl Carter and Jose Hernandez, plus soul-powered takes on a versatile mix of tunes popularized by Dave Mason (“Only You Know and I Know”), Jimmy Ruffin (“What Becomes of the Brokenhearted”), Tyrone Davis (“Turn Back the Hands of Time”) and Kay Kay Greenwade (“Waiting for Dreams”).

Both men are uniquely qualified to sing the gospel of soul music. Johnny Rawls was O.V. Wright’s music director and guitarist back in the 1970s and after his mentor died in 1980 he played a large role in keeping Wright’s band going strong into the 1990s. (They backed and opened for R&B stars like Little Johnny Taylor, Little Milton and Bobby “Blue” Bland). In his own long-established solo career, Rawls continues to draw inspiration from Wright’s Southern soul music, as well as the other greats.

Although he had some early success at other labels, Otis Clay made his bones starting in the early 1970s during his stay at the legendary Hi Records in Memphis, under the tutelage of the great Willie Mitchell, who produced a long string of soul music classics for Clay, including “Trying to Live My Life Without You.” During that time, he also became an international touring star, drawing huge crowds throughout Europe and in Japan, too. He was enshrined in the Blues Music Hall of Fame in 2013, a testament to his ongoing success as a recording artists and touring performer.

While both Otis Clay and Johnny Rawls traveled in the same circles back over 40 years, they never really connected on a personal level for many years. “We really got to know each other well starting about 10 years ago,” says Rawls. “I was a big fan of Otis. Working with O.V. was a wonderful experience, and now getting a chance to work with Otis is even better. We have a lot in common: both of us come from a gospel background. We had a lot of fun recording this album.”

Clay’s comments echo Rawls’ feelings. “We knew each other before we knew each other,” jokes Otis. “O.V. Wright and I go back to when we were both doing gospel music and our careers were very similar. Johnny absorbed all that great music from O.V and we had such a good time recording these songs. For me, it’s a good feeling to talk to someone like Johnny about names, places and events we’re both familiar with from back in the day. There’s so much that we have in common. And Bob Trenchard is really tuned into all this music and just let us go for it.”

Magnus Berg :: CUT ME LOOSE The Knickerbocker All Stars :: OPEN MIC AT THE KNICK