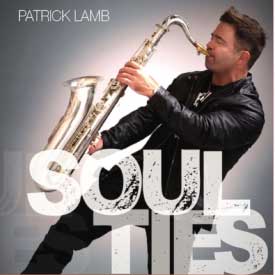 Patrick just returned from Europe after a month of tour dates with Gino Vannelli and some guest appearances and dates with Marc Broussard to release his new release Soul Ties.

Patrick was invited to perform at the White House twice for the Peace on Earth Celebration and lighting of the Christmas tree. He’s performed everywhere from the Kennedy Center to the Blue Notes worldwide keeping up a consistent schedule of over 150 dates a year.

Patrick is currently and has been section leader for Gino Vannelli for the last ten years and part of a new PBS special Live in LA at the Saban Theatre. Patrick’s new record was recorded in Los Angeles under his label Patrick Lamb Productions featuring Lil John Roberts, Tony Maiden, Alex Al, Jeff Lorber, and Frank McComb as a guest artist on Patrick’s arrangement of Bill Withers song, “Whatever Happens.”

Over the past years Patrick has broken out as a solo artist,  entrepreneur (founder and designer of all elements of Ticket Tomato), his Production Company Patrick Lamb Productions, and agent for Jazz at the Oxford in Bend Oregon where all of the shows have sold out. He’s completed studio albums and produced an award-winning show, Let The Good Times Roll, A Tribute To Ray Charles. A Tribute To Ray Charles, debuted at the 2005 Safeway Waterfront Blues Festival and the 15 piece big band All-star group released a CD produced by Lamb at the 2006 festival during the tributes encore performance. The tribute has received stellar reviews both regionally and nationally, and the show opened the Oregon Symphony Pops season.

Listen to Patrick’s new record here and sample the entire CD on iTunes.

SoCal Divas of Blues fest to donate to Breast Cancer Awareness Thanks to Sears, the musicians who gave America the blues had an ax to grind